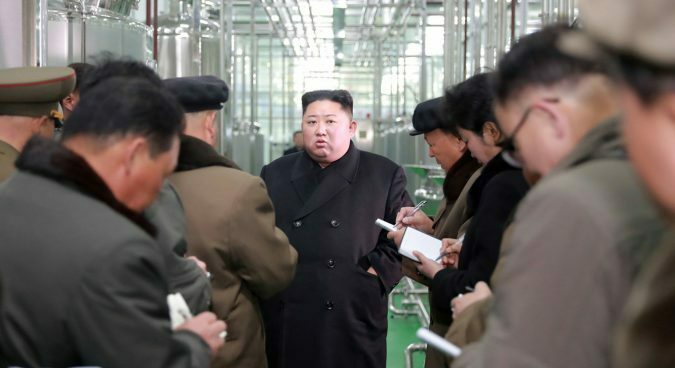 Speaking in Washington DC in some of his first public remarks following his departure from the White House earlier in the month, Bolton appeared to cast doubt on the feasibility of current administration policy towards North Korea.

“It seems to me clear that the DPRK has not made a strategic decision to give up his nukes,” the former National Security Advisor — long seen as a hardliner within the administration and a frequent subject of North Korean ire — told at audience at the Center for Strategic and International Studies (CSIS).

“In fact, the contrary is true… the strategic decision that Kim Jong Un is operating through is that he will do whatever he can to keep a deliverable nuclear weapons capability,” he continued.

“He may try to get relief from international sanctions, he may try to get some concessions, but under current circumstances, he will never voluntarily give up his nuclear weapons.”

Urging the U.S. not to accept a so-called “partial deal” with North Korea — increasingly seen as a possibility among some North Korea watchers — the former National Security Advisor warned against what he saw as premature concessions for Pyongyang.

“I think right now we are in a classic standoff with North Korea… they want a piece of something that we should not be prepared to give them,” he argued.

“Action for action, as the North Koreans call it, is a way to sustain their authoritarian political system, keep their economy going, and yet still have the benefit of the bulk of their ballistic missile and nuclear programs.”

Bolton left the White House in early September, in a departure prompted, at least in part, by marked disagreement other administration over multiple areas of U.S. foreign policy.

Among these disagreements was how best to respond to a spate of renewed missile testing by the DPRK: while President Trump repeatedly stressed that the launches were of no concern, Bolton emphasized that they broke UN Security Council resolutions.

Speaking on Monday, Bolton stressed that a self-declared moratorium on long-range missile and nuclear testing by the DPRK “tells us nothing about either North Korea’s intention or its strategy” and reiterated his view that the testing of short-range missiles violated UN resolutions.

“One very troubling reason why there’s no testing… is that North Korea has in its judgement, for well or ill, finished testing and can produce nuclear warheads and long-range ballistic missiles,” he said. “That’s not an encouraging sign.”

Bolton’s departure from the White House was welcomed by many inside and outside the administration — and in Pyongyang — with some claiming it would allow the U.S. more flexibility in talks with North Korea.

Mintaro Oba, a former U.S. State Department diplomat who previously argued against Bolton’s appointment as National Security Advisor, told NK News that his remarks on Monday were “not surprising.”

“Bolton… has a very long record of bad policy advice,” he said. “I’m glad this cancerous tumor is outside the U.S. government and not rotting our policy process from within.”

Seeking to lay out what he saw as the appropriate response to the threat from North Korea to the United States, Bolton on Monday also laid out three possible options for Washington.

“There are things we should look to and have serious discussions about,” he said. “One is the possibility of regime change in North Korea, second we should look at and discuss with China… aiming towards the reunification of the peninsula under a freely-elected government in South Korea.”

“And third, if you believe, and you may not, that it is unacceptable for North Korea to have nuclear weapons, at some point military force has to be an option.”

He also appeared to seek to defend his previous, controversial suggestion while in office that North Korea could follow the “Libya Model” of denuclearization, a reference to leader Muammar Gaddafi’s decision to relinquish his nuclear weapons in the early 2000s.

North Korea has long rejected such a model — particularly in light of Gaddafi’s violent overthrown during a U.S.-backed military intervention in 2011 — and President Trump later admitted that Bolton’s comparison was a “setback” in talks.

About about practical such a model would be on Monday, Bolton said it would only be “feasible if [North Korea] concludes they are better off and safer without this program.”

“If you believe that North Korea has undertaken the development of nuclear weapons not simply for defensive purposes but because they still believe the North Korean theology that Korea will be reunited under their rule, there’s a very good reason for them to have those capabilities,” he added.

“So if that’s the conclusion, then I think you have to look to other methods to do it, and it may be the Libya model is not possible.”

North Korea under the current circumstances may likely never relinquish its arsenal of nuclear weapons, former U.S. National Security Advisor John Bolton said in a wide-ranging speech on Monday.Speaking in Washington DC in some of his first public remarks following his departure from the White House earlier in the month, Bolton appeared to cast doubt on the feasibility of current