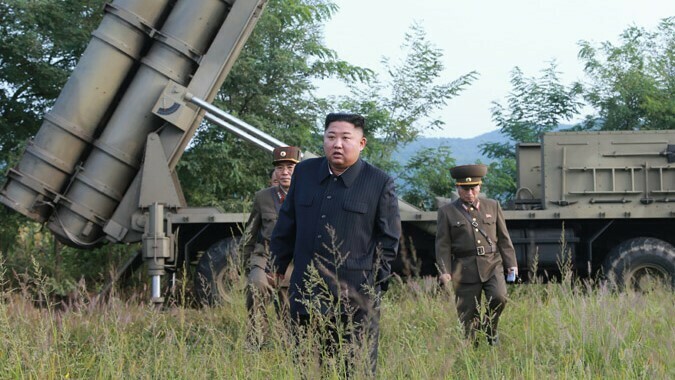 The test was Pyongyang’s eight since July 25 and its tenth this year, including two earlier launches in May. It was also the country’s first since August 23, when the DPRK tested what it called a “super-large” MLRS.

Tuesday’s launch now appears to have been of the same weapon, with the state-run Korean Central News Agency (KCNA) reporting Kim Jong Un had given “field guidance to the test-fire of super-large multiple rocket launcher again.”

“The Supreme Leader learned in detail about the indexes to be confirmed in the test-fire while measuring the time of combat deployment of super-large multiple rocket launcher,” KCNA said in an English-language report.

“Two rounds of test-fire took place,” it continued — claims in line with the South Korean military’s assessment yesterday but questioned by some analysts, with state media imagery suggesting a third missile may have been launched.

It also remains unclear where the missiles touched down: while initial assessments suggested that both made land in the East Sea, South Korean media has reported that one may have crashed in-land.

Despite this, Kim Jong Un hailed the test, saying it “was in full line with its purpose and served as an occasion to clearly decide the next-stage orientation to complete the weapon system.”

The new system has now been “finally verified in terms of combat operation, the characteristics of trajectory, accuracy and precise homing functions,” the DPRK leader was reported to have said, while suggesting that more testing of the new weapon may still be required.

“What remains to be done is running fire test which is most vivid character in terms of the power of multiple rocket launcher,” KCNA reported Kim as having said.

“He indicated immediate tasks and ways for putting the production of our style tactical guided weapons including super-large multiple rocket launcher on the highest level,” it continued.

One expert said Tuesday’s appearance of the new MLRS — also tested in July — was to be expected given patterns in recent testing by Pyongyang.

“All of the other new systems had seen more than two test firings,” Ankit Panda, an adjunct senior fellow at the Federation of American Scientists, said.

“They conducted the first test at a minimum energy trajectory and now, keeping with the times, have tested this MLRS on a depressed trajectory,” he continued.

But Minyoung Lee, a senior analyst with NK News‘s sister site NK Pro, said the broad tone of Wednesday’s coverage suggested not all may have gone according to plan.

“The toned down language in today’s readout seems to suggest that the latest weapons test may not have been a complete success,” Lee said.

“It said the test-fire ‘completely conformed with the purposes of the test-fire,’ but fell short of calling it ‘successful’ or praising the weapon’s precision and reliability, unlike in previous reports,” she continued.

‘The September 10 weapons launches were cross-country, according to the South Korean military. However, unlike the last time North Korea conducted a cross-country test-launch, state media today said nothing about weapons flying inland.”

Kim Jong Un was reportedly accompanied at the test by a litany of top officials, including the recently-promoted chief of the general staff of the Korean People’s Army (KPA) Army General Pak Jong Chon.

Kim Jong Sik and Ri Pyong Chol, known for their leading roles in the country’s missile program, were also present.

More surprising is the appearance of Kim Yo Jong, the DPRK leader’s sister and a powerful official in the ruling party’s propaganda apparatus — her second such appearance during a test in recent weeks.

“Kim Yo Jong’s appearance for a second time at a missile test would suggest to me that her prominence in military affairs is growing,” Panda said.

North Korea’s Tuesday test was notable for its timing, coming just hours after the country’s vice foreign minister expressed an openness to restart long-stalled talks with the U.S. at the end of the month.