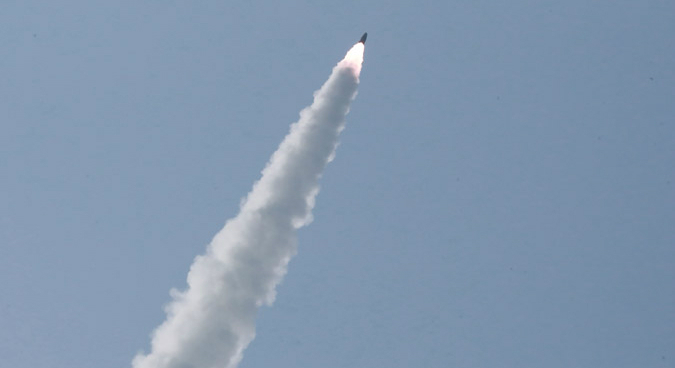 Update: this article was amended at 1915 KST to include further details from the South Korean military

North Korea on Thursday afternoon test-fired at least one projectile, South Korea’s Joint Chiefs of Staff (JCS) announced, the country’s second such test in less than a week.

The projectile was launched at around 1630 KST from Sino-ri in the DPRK’s North Pyongan Province in an eastwards direction, the JCS said in a statement.

No further information has been given, with more details likely to emerge in the coming hours and from the DPRK’s state media on Friday morning.

Similar to Thursday’s reportedly 420-kilometer test, those launch events resulted in 500-kilometer and 550-kilometer missile flights over the peninsula with a splashdown in the East Sea.

The ROK JCS later in the day confirmed that Pyongyang is believed to have test-launched two short-range missiles.

“North Korea today (May 9) launched two unidentified projectiles –- which are presumed to be short-range missiles — in an eastward direction at 1629 and 1649 local time from the Kusong region in North Pyongan Province.”

The JCS also said that the projectiles are estimated to have flown around 420km and 270km.

“The South Korean and U.S. intelligence authorities are conducting the detailed analysis,” the ROK JCS said in a separate written statement.

“Our military has fully maintained the readiness posture in close coordination between the ROK and the U.S. while heightening surveillance and vigilance in preparation for further launch by North Korea.”

The move comes just five days after the DPRK’s test on Saturday of what experts now largely agree was a short-range ballistic missile (SRBM), among other new strategic weapons.

That missile — similar in appearance to the Russian Iskander rocket — has a range of about 300 kilometers, according to 38 North.

North Korea in the last 24 hours has issued several statements defending that exercise as “self-defensive,” with spokespeople from both its military and foreign ministry denouncing South Korea’s condemnation of the drill.

The test also comes amid a visit to South Korea by U.S. Special Representative Stephen Biegun, who is set to meet with the country’s unification minister tomorrow for discussions on denuclearization and humanitarian aid.

One expert said the two tests marked the beginning of “a period when the North Koreans will slowly but steadily increase tensions in the region” and that Pyongyang was likely seeking to put pressure on Washington.

“They want to show the Americans that contrary to their assumptions, time is not necessarily on their side,” said Andrei Lankov, a director at the Korea Risk Group, which owns and operates NK News.

“They will try to keep reminding the world, and the White House in particular, that unless some compromise is worked out, and some concessions on sanctions issues are made, they are capable of creating a serious mess in East Asia.”

Update: this article was amended at 1915 KST to include further details from the South Korean militaryNorth Korea on Thursday afternoon test-fired at least one projectile, South Korea's Joint Chiefs of Staff (JCS) announced, the country's second such test in less than a week.The projectile was launched at around 1630 KST from Sino-ri in the DPRK's North Pyongan Province in an eastwards