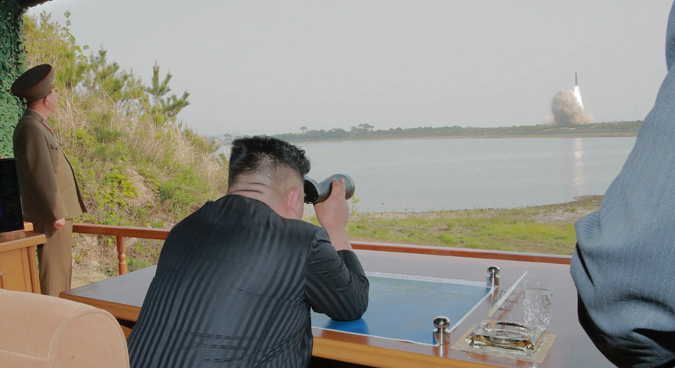 North Korea’s foreign ministry in a statement Wednesday issued a stern defense of the country’s surprise missile test over the weekend, warning unnamed “forces” against describing it as provocative or destabilizing.

The comments came in a response given by a spokesperson for the country’s Ministry of Foreign Affairs (MFA) to a question from a journalist from the Korean Central News Agency (KCNA).

They are the DPRK’s first public statements since characterizing the surprise Saturday weapons test as a readiness drill in state media the following day – a test which many experts have argued represented Pyongyang’s first missile test since November 2017.

Both South Korea and the U.S. in the aftermath of the exercise issued notably muted responses, with Seoul in particular refraining from describing the test as provocative and refusing to say whether the North had launched a missile.

U.S. Secretary of State Mike Pompeo on Sunday also sought to downplay the impact of the test, saying it would not dissuade Washington from continuing negotiations with the DPRK.

The South Korean defense ministry on Tuesday did, however, warn that the exercise “runs against the intent” of 2018’s inter-Korean military agreement and urged the DPRK to stop “heightening military tensions on the Korean peninsula.”

The DPRK foreign ministry spokesperson on Wednesday refrained from naming any countries or referring to any specific statement.

They instead accused unnamed “forces” of “spiteful remarks on our recent military drill of regular and self-defensive character,” complaining that those countries had been “mute” on Pyongyang’s purported efforts to promote the “peace and stability of the Korean Peninsula.”

“The recent drill conducted by our army is nothing more than part of the regular military training, and it has neither targeted anyone nor led to an aggravation of situation in the region.”

Condemning the recent joint U.S.-ROK Dong Maeng and joint aerial military drills, the spokesperson then accused the allies of preparing for an invasion of the North.

“Only our regular and self-defensive military drill is branded as provocative, and this is an undisguised manifestation of the attempt to press the gradual disarmament of our state and finally invade us,” they said.

“We think this is very much unpleasant and regrettable, and we sound a note of warning.”

The spokesperson also warned against “baseless allegations against us.”

“It might produce a result of driving us to the direction which neither we nor they want to see at all,” they said. “We will watch the future words and deeds of those forces.”

Wednesday’s comments follow several hardline statements from the country’s foreign ministry as negotiations with the U.S. have continued to stall.

MOFA officials in the past few weeks have, among other things, condemned U.S. National Security Advisor John Bolton and urged President Trump to drop Secretary of State Pompeo as his chief negotiator.

It also comes in wake of NK News reporting that North Korean diplomats abroad are increasingly isolating themselves from foreign counterparts, avoiding meetings with regular contacts at embassies in multiple Western countries.

North Korea's foreign ministry in a statement Wednesday issued a stern defense of the country's surprise missile test over the weekend, warning unnamed "forces" against describing it as provocative or destabilizing.The comments came in a response given by a spokesperson for the country's Ministry of Foreign Affairs (MFA) to a question from a journalist from the Korean Central News Agency