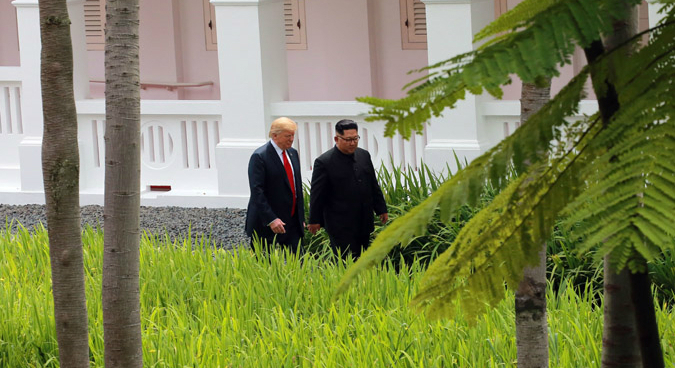 North Korea’s foreign ministry on Friday rejected what they claimed were U.S. attempts to shift the blame for the failure of February’s DPRK-U.S. summit in Hanoi, warning that diplomacy will continue to remain on hold until Washington’s posture changes.

The comments came in a response given by a spokesperson for the country’s Ministry of Foreign Affairs (MFA) to a question from a journalist from the Korean Central News Agency (KCNA).

Asked to respond to reported comments by U.S. officials “imputing the cause of the breakdown of the DPRK-U.S. summit in Hanoi onto us,” the spokesperson defended Pyongyang’s “significant and meaningful measures” towards denuclearization.

“As we have already clarified, the fundamental reason for the DPRK-U.S. summit in Hanoi going wrong was that the U.S. insisted on completely unfeasible proposals and took a unilateral and unfriendly attitude,” they responded.

“As we clearly clarified once again, the U.S. will not make us move even an inch with its current logic,” they continued. “As U.S. distrust and hostile acts towards us augment, our actions corresponding to them will follow.”

It remains unclear to which comments, precisely, Pyongyang is responding, though they do come following claims by President Donald Trump that he had in the wake of their failed summit told Kim Jong Un that “you’re not ready for a deal.”

“He wanted to get rid of one or two sites, but he has five sites,” the U.S. President told Fox News in an interview on Sunday — a reference to North Korea’s offer at that summit to dismantle its Yongbyon nuclear facility in exchange for partial sanctions relief.

“I say, ‘What about the other three sites? That’s no good — if we’re going to make a deal, let’s make a real deal,'” Trump continued.

This request, it would appear, resulted in the spokesperson accusing the U.S. of “insisting we unilaterally disarm.”

While not naming the President directly — in marked contrast to other recent MFA statements singling out National Security Advisor John Bolton and Secretary of State Mike Pompeo — Friday’s statement instead blamed the U.S. for a now months-long diplomatic impasse.

“Unless the U.S. abandons the current calculation method… DPRK-U.S. talks will not be resumed anytime soon and the prospect for the resolution of the nuclear issue will become darker,” they said.

“The U.S. had better learn how to engage in dialogue, while looking straight at the reality and how to negotiate anew.”

DPRK ambassador to the UN in Geneva Han Tae Song on Wednesday described the issue as the “biggest” source of contention between Pyongyang and Washington at the moment.

“It would be the greatest miscalculation if America thought my country is among the countries where American-style logic of strength or pressure might work,” Han told Reuters.

The commentary also follows a string of what one analyst described as “lower-level, meekly worded foreign ministry pronouncements” in recent weeks.

“It likely won’t be carried by domestic media, which will give the regime some wriggle room for its actions down the road,” Minyoung Lee, an expert on North Korean media and leadership with NK News‘s sister site NK Pro, said.

“The pronouncement does, however, say DPRK actions will correspond with U.S. hostile actions,” she continued.

“All in all they’re keeping it lower level for now, but taking this pronouncement and the recent MFA pronouncement on the Wise Honest, I feel they’re laying the groundwork for a provocation — or major announcement — of some kind.”

Another expert said Friday’s report suggested Pyongyang remained at “a critical phase, pinning the blame for the Hanoi failure squarely on the United States.”

“It is worth seeing the statement in the light of domestic messaging about the current state of affairs,” Chris Green, a North Korea expert at the International Crisis Group, told NK News.

“Recent lectures in people’s units… have taken a hard line, saying that the United States demanded immediate and unconditional denuclearization in Hanoi but Kim Jong Un defended the nation and people by rejecting the American demand,” he continued.

North Korea's foreign ministry on Friday rejected what they claimed were U.S. attempts to shift the blame for the failure of February's DPRK-U.S. summit in Hanoi, warning that diplomacy will continue to remain on hold until Washington's posture changes.The comments came in a response given by a spokesperson for the country’s Ministry of Foreign Affairs (MFA) to a question from a journalist