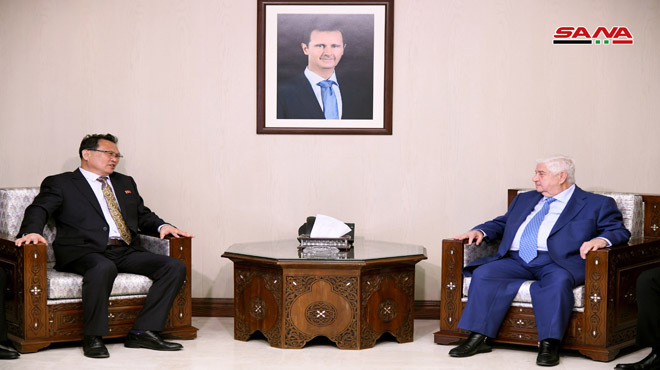 The comments reportedly came in a meeting between Syria’s Deputy Foreign and Expatriates Minister Dr. Fayssal Mikdad and Pak, who is visiting both Syria and Iran — as well as Azerbaijan and Mongolia — this week.

“Pak Myong Guk hailed the achievements realized by the Syrian Arab Army and the steadfastness of the Syrian people in the face of the terrorism practiced by Western powers on Syria in all of its forms,” SANA reported.

“The latest of which was the economic war, indicating at the same time that his country seeks to contribute to supporting Syria in the domain of reconstruction.”

Pak’s comments echo those made by the DPRK’s then-ambassador to Syria Jang Myong Ho in 2017, in which he said that North Korea viewed the possibility of helping with reconstruction as a way to improve bilateral relations.

Wednesday’s report added that Pak was visiting Damascus to “affirm the importance of relations between Syria and the DPRK,” with the two sides also noting “historic relations binding the Syrian Arab Republic and the DPRK in different economic, military and political domains.”

The UN Panel of Experts’ (PoE) most recent report on North Korean sanctions stated the group is conducting “multiple” investigations into the two countries’ illicit activity.

In its most recent report, the PoE investigated North Korean technicians traveling to Syria and DPRK nationals working for UN-sanctioned Syrian organizations.

The Panel also found that the North’s technical staff had visited Syrian defense-related facilities and met with members of the Syrian armed forces.

“Their names and passport numbers differ from the groups of DPRK technicians engaged in ballistic missile and other prohibited activities who previously travelled to and returned from the Syrian Arab Republic in February 2011, August 2016, November 2016, and March 2017 and therefore show the DPRK’s prohibited military cooperation with the Syrian Arab Republic has continued unabated,” the PoE wrote.

“(North Korea) continues to violate the arms embargo and has attempted to supply small arms and light weapons and other military equipment to Houthi rebels in Yemen, as well as to Libya and the Sudan, via foreign intermediaries, including Syrian arms trafficker Hussein al-Ali in the case of the Houthi rebels,” the PoE wrote.

Military cooperation with Damascus has likely been ongoing since the start of the Syrian civil war in 2011, she added.

President Assad was also last year reported to have expressed his intention to visit North Korea and meet with Kim Jong Un, though no date for that summit has been set.