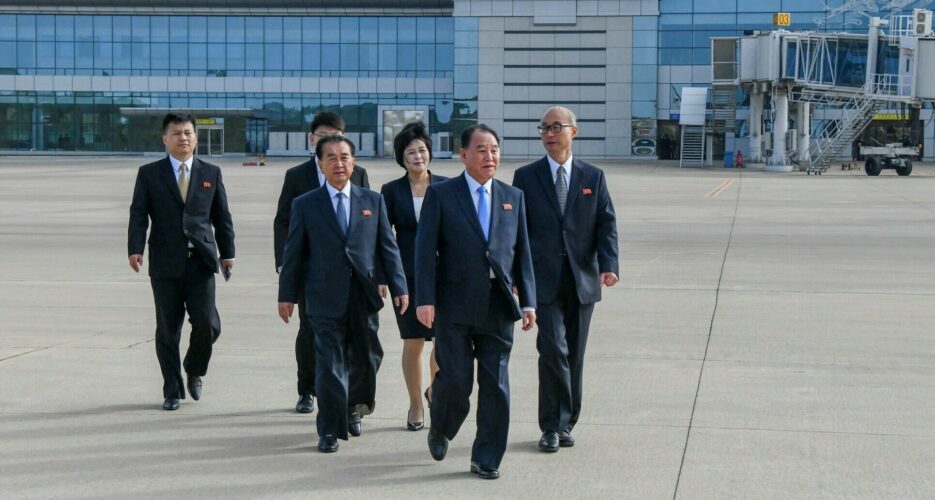 The surprise cancellation on Wednesday of planned talks this week between U.S. Secretary of State and his North Korean counterpart Kim Yong Chol was initiated by the DPRK side, South Korea’s foreign minister told lawmakers on Thursday.

The U.S. State Department announced yesterday that a planned meeting between Secretary Pompeo and Kim, due to take place the following day in New York, had been postponed and would be reconvened “when our respective schedules permit.”

No indication was given at the time over which sides called off the talks.

Speaking at a budgetary hearing of South Korea’s National Assembly’s Foreign Affairs and Unification committee on Thursday, however, minister Kang Kyung-wha said U.S. counterparts had explained “the North Korean side… postponed it.”

Responding to questioning by opposition lawmaker Chung Jin-suk, Kang declined to comment on when the North had informed the U.S. of its decision not to participate, reiterating that Seoul was notified in advance through various channels between the two countries.

Kang did, however, say that she had been informed of the news by her colleague, Special Representative for Korean Peninsula Peace and Security Affairs Lee Do-hoon “urgently during a luncheon event,” suggesting Seoul only learned of the news an hour or so before it was made public.

South Korea had been informed that the meeting was called off due to scheduling difficulties, she added.

“We were informed by the U.S. that the North proposed the postponement with the explanation that both sides have a tough schedule,” Kang said.

The U.S. State Department is as of 1400 KST on Thursday yet to respond to NK News‘s requests for confirmation that it was the DPRK side which cancelled the talks.

A regular briefing yesterday, however, saw deputy spokesperson Robert Palladino also say that scheduling issues had let to its postponement.


“Timing, timing. This has to do with timing as a matter – we’re talking about scheduling. And I’ll leave it at that,” he said.

South Korean media on Wednesday reported that Kim’s delegation had on Tuesday cancelled a planned flight to Beijing from Pyongyang, suggesting it was the North Korean side which had withdrawn from the meeting.

The Wall Street Journal on Wednesday, too, reported that it was the DPRK which called off the trip and that the U.S. State Department had been in the process of preparing visas for the DPRK high-level delegations.

The talks were set to be the first high-level talks between Washington and Pyongyang since a visit by Secretary Pompeo to Pyongyang in October, and were expected to focus on denuclearization and plans for a second summit between DPRK leader Kim Jong Un and U.S. President Donald Trump.

Their postponement comes as both sides have dug their heels in on whether relief from international sanctions for the DPRK should come before or after its full denuclearization, with a commentary by North Korea last week warning it may restart its nuclear development should concessions not be forthcoming.

Speaking to NK News following the news, one expert said the meeting was likely called off due to a lack of clarity over what was to be achieved in the talks.

“The sides have to work out what are called “parameters” for the negotiations: principles and broad tradeoffs that will need to then be bargained out,” Stephen Haggard, an NK News contributor and professor at UCSD, said. “That work—as far as I can see—has not really been done.”

Another expert cautioned against reading the news “as signaling a collapse in negotiations.”

“The North Koreans are notorious for canceling things or threatening to cancel things at the last minute to put pressure on their adversaries, and that may well be what’s happening here,” said Mintaro Oba, a former Korea Desk Officer at the U.S. State Department.

“Maybe they’re hoping to create tension at the Pompeo level that has to be resolved by a personal exchange between Trump and Kim Jong Un.”

President Trump in a press conference on Wednesday stressed that he believed that planned summit would go ahead, and that it would take place “sometime early next year.”

He also sought to downplay the significance of the cancellation, saying the U.S. was “very happy with how it’s going with North Korea.”

The surprise cancellation on Wednesday of planned talks this week between U.S. Secretary of State and his North Korean counterpart Kim Yong Chol was initiated by the DPRK side, South Korea's foreign minister told lawmakers on Thursday.The U.S. State Department announced yesterday that a planned meeting between Secretary Pompeo and Kim, due to take place the following day in New York, had been