Don’t panic! Why the Kim Yong Chol meeting cancellation is par for the course
The surprise postponing of a much-anticipated meeting could actually work in the U.S.'s favor
Soo Kim November 7, 2018 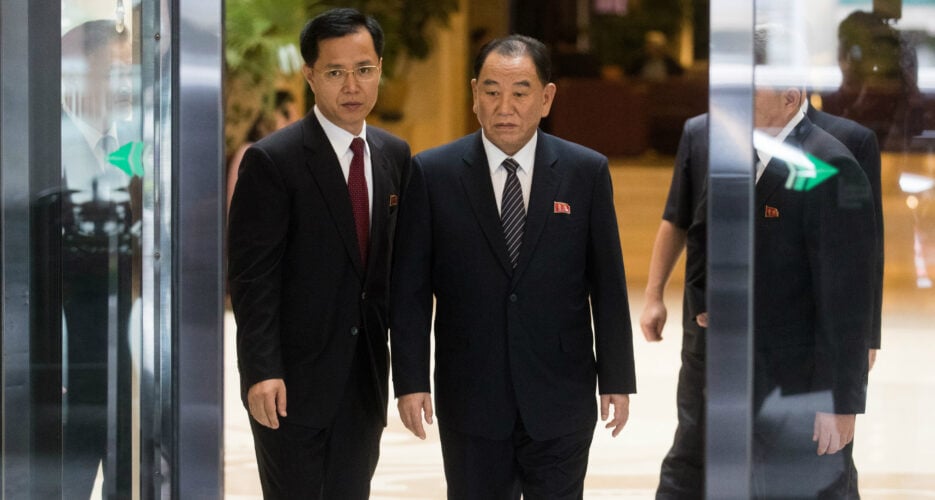 Our knee-jerk reaction is to jump to conclusions about the direction of U.S.-North Korea relations and the fate of negotiations over the DPRK’s nuclear weapons program. But does this really come as a surprise? And what does this cancellation portend in the way of future talks with the Kim regime?

Pyongyang’s cancellation of the meeting shouldn’t come as a shock. It’s an oft-used tactic by the DPRK in negotiations – the element of surprise. Additionally, in the current state of affairs, there has been little headway between the two sides grappling over the nuclear issue, sanctions, and a declaration to end the Korean War.

And really, what could Washington have given Pyongyang in this round of negotiations that would have satisfied?

North Korea likely calculated that another meeting at this point would not have led to much. The U.S. has been insisting upon North Korea’s steps toward complete denuclearization – symbolic, cosmetic gestures of dismantling an already-defunct facility does not lend confidence in the DPRK’s seriousness to denuclearize – before any economic relief or discussions about peace can be handed over.

Last week, North Korea issued a threat that it could restart building up its nuclear forces and its byungjin policy if the U.S. does not ease sanctions levied over the country. This is also a leverage tactic to set the agenda for the talks in Pyongyang’s favor; it also sends a message to Washington and Seoul that the DPRK is not happy with the current conditions.

What would the U.S. have given to North Korea if the talks had taken place? And what would Washington’s interlocutors have walked away with?

The U.S. has already obtained symbolic gains during the Singapore summit. And while we realize that the North Korean nuclear issue is a point of contention requiring a long-haul commitment to solve, since the June summit – or better yet, the Panmunjom summit in April – we have little to show in the way of credible progress on the nuclear issue.

To wax symbolic through yet again another summit would, at this point, not have been to Washington’s benefit.

Likely, the U.S. would not have willingly granted leniency to Pyongyang on denuclearization, easing of sanctions, or a peace declaration. And from North Korea’s optics, handing over a timetable or a list of its nuclear facilities and stockpiles when Washington has not really budged from its position would have been out of the question.

LOOK ON THE BRIGHT SIDE

With neither side willing to budge, North Korea’s cancellation of Thursday’s talks isn’t a huge surprise; it’s also not that bad of a position for Washington be in. As some would argue, Pyongyang hasn’t tested any nuclear weapons or missiles – meaning there’s “greater peace” now than before.

Under this premise, a cancellation or delay in scheduling talks with North Korea might not be such a bad alternative. Talks gone south or one in which we slip and create additional loopholes for Pyongyang would just make the second summit, if it shall take place, another easy field for Kim Jong Un.

A second summit of good design would afford Washington and Pyongyang the opportunity for dialogue at the highest level. And constructive dialogue could potentially bring the two sides to a committed agreement, wherein each side takes credible, irreversible steps toward peaceful relations, a reduction in the nuclear threat, and regional stability.

But under the current framework, it’s unclear what either side would have given up, and realistically, what we could have achieved on the North’s nuclear front.

The current layout of the negotiations is configured to Pyongyang’s playbook. Cancelling the talks last-minute, while not unexpected, does convey the Kim regime’s dissatisfaction with the status quo; it could also pressure Washington and Seoul to reassess their positions, and maybe, just maybe – if the U.S. had deliberated some strong demands from North Korea in the upcoming round of talks – soften our approach in dealing with the Kim regime.

While it may be tempting to do just this for a short-term gain, the U.S. could play a stronger hand by holding firm to its position on denuclearization first, before economic and security concessions are made.

We may see a similar pattern from North Korea in the coming weeks and months.

On 8 November, Secretary of State Pompeo and his sometime-North Korean counterpart, Kim Yong Chol, had been slated for another meeting in New York to lay the groundwork for a second Trump-Kim summit sometime early next year.It appears that it was Pyongyang, however, that pulled the rug from underneath by abruptly cancelling the meeting – South Korean media are reporting that it was unclear

Soo Kim is a former CIA North Korea analyst, focusing on the country's leadership, nuclear proliferation and propaganda analysis. She was a 2015 National Security Fellow at the Foundation for Defense of Democracies, where she authored a monograph on the South Korean nuclear program.