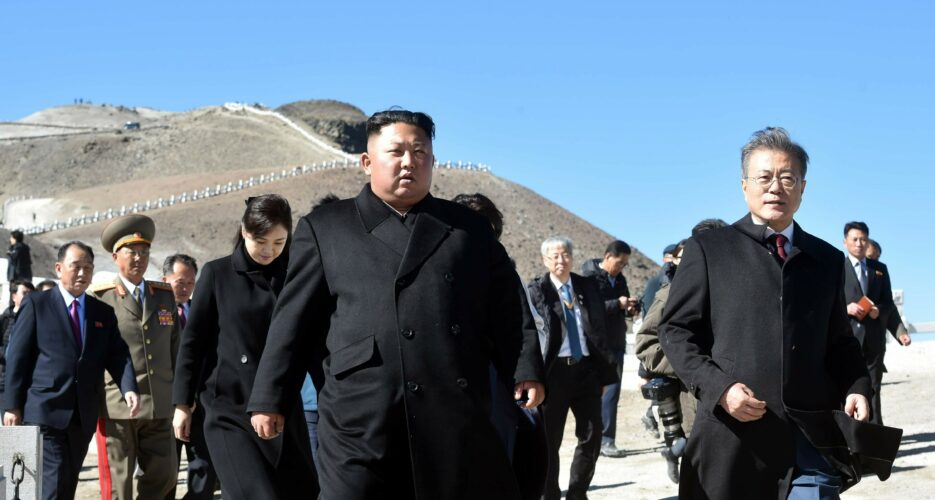 The leaders of the two Koreas wrapped up a three-day summit on Thursday morning with a trip to the peak of the peninsula’s highest mountain.

The DPRK leader told Moon he hoped to “write a new history of inter-Korean relations.”

“Even though a small number of people can come here today, more people from the South as well as overseas Koreans should come and see Paektu Mountain,” Kim said in a statement carried by the Pyeongyang Press Corps.

“I believe that if these are followed by more and more steps, then many others will visit, and it won’t take long before the general public from the South can come here for sightseeing,” Moon replied.

Moon previously told Kim Jong Un he hoped to visit the Mount Paektu and Kaema Plateau during a banquet held during his first meeting with the North Korean leader in April.

“I thought I would be able to do that fairly soon, but it has taken a long time. So it seemed like it could become an impossible dream. But, now, my dream has been realized,” the President said on Thursday.

The leaders then held a private conversation, with Moon asking about the boundary between China and North Korea and the DPRK leader making a joke when the two reached the top.

“Why doesn’t the South Korean delegation take a photo with the President? Can I take a photo?” he said.

ROK Minister of Oceans and Fisheries Kim Young-choon then suggested the North Korean leader be taken to Mount Halla – the peninsula’s second highest peak – when he visits the South this year.

Moon departed for the mountain from Pyongyang’s Sunan International Airport at 0727 local time on ROK Air Force One, arriving at Samjiyon Airport at 0820 local time.

Moon and Kim then drove to Janggun Peak, travelling down to Chonji Lake by cable car at 1020 local time.

Since coming to power, Kim Jong Un has visited the mountain several times.

He first scaled the peak in December 2013: just a few days before the execution of his uncle Jang Song Thaek.

His most recent visit took place in December last year, when he climbed Mount Paektu and visited Samjiyon County in aftermath of his announcement that North Korea had completed its nuclear program.

Speaking at a press briefing Thursday evening, Senior Secretary to the President for Public Communication Yoon Young-chan said there had been no “close consultation” between the two sides on whether inter-Korean tourism to Mount Paektu might be part of joint economic projects in the future.

Yoon also told press that Kim Jong Un had gifted Moon two tons of pine mushrooms, which arrived at Seoul Air Base early this morning on a cargo plane.

The Blue House has selected 4000 citizens with family members and relatives in the North to receive the mushrooms during the upcoming Chuseok holidays.

“I hope these could be comfort those who miss families and siblings even a little,” a message to the families from the President will read. “I believe the day when we can embrace our families must come. Please stay healthy until that day.”

When asked on Thursday if the South Korean President had achieved his goal of “irrevocable progress” on the establishment of a peace regime and denuclearization, Blue House spokesperson Yoon responded in the affirmative.

“My understanding is that we are taking a concrete and realistic step toward irreversible stage and progress,” he said.

The leaders of the two Koreas wrapped up a three-day summit on Thursday morning with a trip to the peak of the peninsula's highest mountain.North Korean leader Kim Jong Un and South Korean President Moon Jae-in visited Mount Paektu's Janggun Peak and Chonji Lake joined by their respective entourages and first ladies Ri Sol Ju and Kim Jong-sook.The DPRK leader told Moon he hoped to