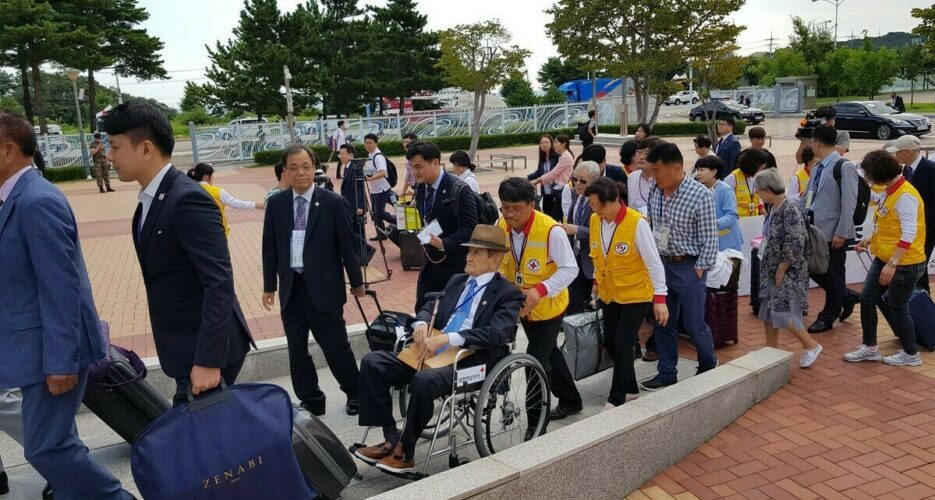 The two Koreas on Monday afternoon began five days of reunions of families separated by the Korean War at the DPRK’s Mount Kumgang resort, the South Korean Ministry of Unification (MOU) announced.

A total of 89 South Korean nationals will meet family members from North Korea at the first round of meetings from Monday to Wednesday.

The oldest participant among them is the 101-year Baek Seong-gyu, who is set to meet his daughter-in-law and granddaughter.

A two hour group meeting started at 1500 local time, to be followed by a banquet hosted by the North.

During the three days of reunions, the South Koreans are scheduled to be reunited with their North Korean families and relatives six times for a total of 11 hours, including in a three-hour private meeting tomorrow.

The South Korean participants on Sunday gathered in Sokcho city on the ROK’s northeast coast, were briefed on the reunion event, and received a medical check-up before their departure for the North this morning.

Buses carrying 197 South Koreans crossed the inter-Korean border on the eastern coast and arrived at the Mount Kumgang resort at 1255 local time, the Ministry of Unification (MOU) confirmed to media.

April’s Panmunjom Declaration saw the two Koreas agree to proceed with reunions of divided families on the occasion of National Liberation Day, which fails on August 15.

Seoul and Pyongyang then agreed on logistics for the meetings at Red Cross talks in June.

Earlier in the month Seoul and Pyongyang shared their final lists of 93 South Korean and 88 North Korean participants for the first and second round of the reunions at the truce village of Panmunjom.

Data provided by the unification ministry suggests that 54.8% will be meeting with lineal family members (brothers, sisters, children, etc).

At the second round of reunions between Friday and Sunday, a total of 83 North Koreans will meet South Korean families, the unification ministry said.

A total of 337 ROK nationals will visit the North in total.

972 North and South Koreans from 186 families participated in 2015’s reunion event, according to statistics provided by the unification ministry.

Since 2000, 19,771 and 3748 Koreans have been reunited with family members through 20 reunion events and seven video conferences.

The two Koreas on Monday afternoon began five days of reunions of families separated by the Korean War at the DPRK's Mount Kumgang resort, the South Korean Ministry of Unification (MOU) announced.