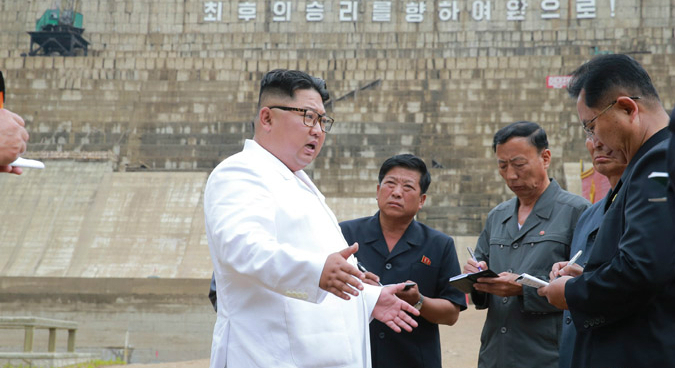 Kim Jong Un was “extremely furious” at the North Korean cabinet’s lax management of a project he visited as part of a series of on-site inspections in a provincial area, describing the situation as “speechless,” the state-run Korean Central News Agency (KCNA) reported on Tuesday.

The North Korean leader in particular reproached cabinet officials for careless management during a visit to the site of the Orangchon Power Station, KCNA said, pointing out that only 70 percent of the project had been completed some 17 years after construction started.

“He was extremely furious after being debriefed that officials of the cabinet hadn’t visited the construction site of the Phalhyang Dam for the past few years,” the KCNA said in a Korean-language version of the report, which included numerous details excluded from official English reporting.

Kim couldn’t understand why the cabinet hadn’t taken any proactive measures to remedy construction projects that had almost come to a standstill due to a lack of efforts and materials.

“He said he was speechless during his on-site inspection … as the cabinet hadn’t submitted a report to suggest decisive measures to complete the construction of  the Orangchon Power Station in an urgent manner for several years.”

While Kim rebuked leading officials of the cabinet for leaving the project to the province to manage, he also called out the Organization and Guidance Department, as well as the economic department of the Central Committee of the Workers’ Party of Korea (WPK), as contributing to the problem.

In a “fierce tone,” Kim said it is “barefaced behavior” that officials responsible for national economic development only participate in the completion ceremonies of power stations, but that they never inspect the construction sites.

And responding to the problem, Kim assigned the Party Central Committee to take future responsibility for the Phalyang Dam from the cabinet, saying it would be impossible to imagine the project’s completion “even through generation changes if he assigns the project to the cabinet like now.”

The DPRK leader also gave an instruction for the dam and power station projects to be completed by October 10, a date which marks the foundation day of the WPK, KCNA added.

Meanwhile, during his visit to the Chongjin Bag Factory, Kim reprimanded the North Hamgyong Provincial Party Committee for “working in a perfunctory manner while disregarding an important policy that should be prioritized.”

“The North Hamgyong Provincial Party Committee did not sincerely accept the Party’s policy on new building (of) a bag factory in line with the capacity while disregarding the work initiated by the Party to provide all necessary things for the schoolers with our own products,” KCNA reported in an official English-language translation.

Kim said the factory’s “attitude toward the acceptance and implementation of the Party policy is very wrong,” KCNA continued, adding the factory “caused great anxiety” to the leader by producing bags in the shabby rooms of the Chongjin Regenerated Fibre Factory.

And in a further Korean language reporting variation, KCNA said Kim provided direction to “conduct an overall review of the projects of the relevant department of the Party Central Committee which didn’t properly control and guide its staff and the provincial project of constructing bag factories.”

The DPRK leader also instructed to “strictly reprove and investigate” the projects of the WPK Central Committee and its officials.

Kim continued his harsh criticism while looking around the Onpho Holiday Camp. He rebuked staff there for “poor management,” pointing out that bathtubs for spa therapy are “dirty, gloomy and unsanitary.”

“He said the condition is poor, that the fish tanks of recently well-built fish farms and dressing rooms are not well-managed and humid, and that the smell is unpleasant because of bad ventilation,” KCNA reported in the Korean language-version.

“(Kim) pointed out it is really messy, asking if people can undergo treatments in such an environment.”

He also asked the North Hamgyong Provincial Party Committee to complete the construction of the Yombunjin Hotel by October 10, adding that “it is a very (big) mistake to delay the construction.”

Though the building project started in July 2011 under the guidance of Kim Jong Il, the plastering of the inside hasn’t yet been finished, the report said.

This is not the first time Kim Jong Un rebuked North Korean officials during his inspections, with the DPRK leader reprimanding them for not fulfilling their responsibilities while he visited the Sinuiju Textile Mill and Sinuiju Chemical Fibre Mill in early July.

And although Kim scolded workers during a visit to a terrapin farm in May 2015, and at a theme park in Pyongyang in 2012, it’s rare to observe such a flurry of direct and widespread criticism by Kim to his government officials and staff in state media.

Kim Jong Un was “extremely furious” at the North Korean cabinet’s lax management of a project he visited as part of a series of on-site inspections in a provincial area, describing the situation as “speechless," the state-run Korean Central News Agency (KCNA) reported on Tuesday. Kim expressed sharp regret after observing poor management at a series of eight units he visited in North