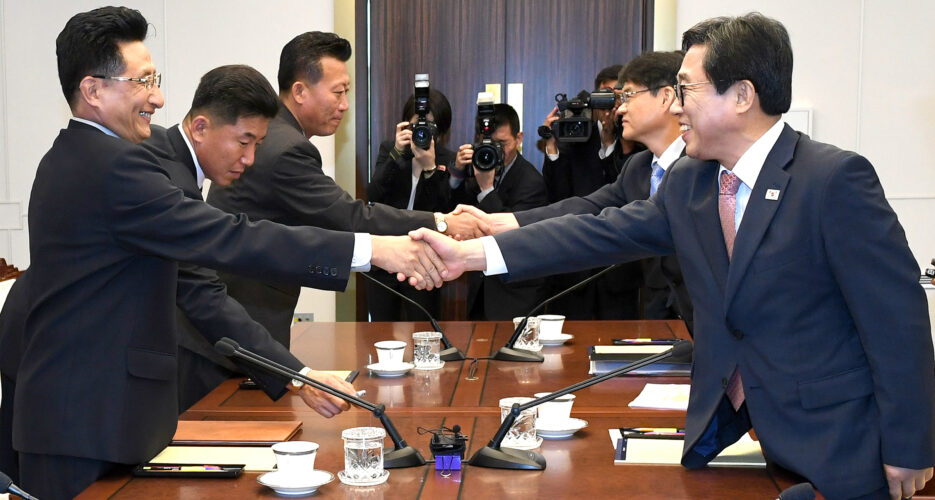 Seoul and Pyongyang on Monday agreed to hold an inter-Korean basketball game next month and to march together under the same flag at the 2018 Asian Games in August, the South Korean Ministry of Culture, Sports and Tourism (MCST) announced.

The news follows a day of inter-Korean Athletic Talks at the Peace House on the southern part of the truce village of Panmunjom.

“The South and North agreed to hold the South-North unification basketball games on the occasion of July 4 in Pyongyang and that Seoul will host games in the autumn,” a joint press statement released following the talks, which began at 1000 KST, read.

Seoul will dispatch male and female players to the matches in Pyongyang, it continued, and the two Koreas plan to hold mixed and friendly basketball games.

The match will mark the anniversary of 1972’s Joint Communiqué, the first signed by the two Koreas since the division of the peninsula.

Should the South-North basketball game take place, it will be the first of its kind since October 2003, when a game was held to mark the opening of Pyongyang’s Ryugyong Jong Ju Yong Gymnasium.

The two Koreas previously hosted the so-called “unification basketball tournament” in September and December 1999 in Pyongyang and Seoul.

Monday also saw both sides agree on a joint march at the opening and closing ceremonies of the 2018 Asian Games, which will be held in Jakarta and Palembang, Indonesia between August 18 and September 2.

With the traditional folk song “Arirang” as background music, North and South Korean athletes will march together under the unified Korean flag, which bears a blue outline of the Korean peninsula on a white background.

North and South Korean athletes marched together ten times between the 2000 Summer Olympics in Sydney and the PyeongChang Winter Olympics in 2018.

The joint statement said the two Koreas had agreed to “form a unified team for some sports events,” without providing further details.

Seoul and Pyongyang plan to discuss the issue with international sports organizations including Olympic Council of Asia (OCA).

The two Koreas formed a joint women’s ice hockey team during the PyeongChang Olympics this February, and most recently unified their team for the quarter-finals of the World Team Table Tennis Championships held in Sweden this May.

Monday’s meeting also saw the North and the South agree to “activate inter-Korean sports cooperation and exchanges” by co-participating in international competitions including 2018 Asian Para Games, among others.

The two Koreas have agreed to hold joint training and match to this end.

Seoul and Pyongyang will discuss practical issues in the field of sports cooperation and exchanges by means of exchanging documents, the statement added.

The Ministry of Unification (MOU) on Friday said Monday’s meeting would “discuss exchange and cooperation in the sports field.”

April’s Panmunjom Declaration saw Seoul and Pyongyang agree to “demonstrate their collective wisdom, talents, and solidarity by jointly participating in international sports events such as the 2018 Asian Games.”

The two Koreas later agreed to hold sectoral meetings at a high-level inter-Korean meeting in June.

Pyongyang’s delegation to Monday’s talks was led by vice minister of Physical Culture and Sports Won Kil U.

Monday’s meeting was one of three inter-Korean meetings to be held this week aimed at sketching out plans for the broader implementation of April’s Panmunjom Declaration.

Inter-Korean Red Cross Talks will be held on Friday at the DPRK’s Mount Kumgang “to discuss humanitarian matters including the reunion of separated families and relatives.”

A 17-member ROK delegation will also visit the Kaesong Industrial Complex (KIC) between Tuesday and Wednesday to prepare for the establishment of an inter-Korean liaison office at the site.

Seoul and Pyongyang on Monday agreed to hold an inter-Korean basketball game next month and to march together under the same flag at the 2018 Asian Games in August, the South Korean Ministry of Culture, Sports and Tourism (MCST) announced.

The news follows a day of inter-Korean Athletic Talks at the Peace House on the southern part of the truce village of Panmunjom.