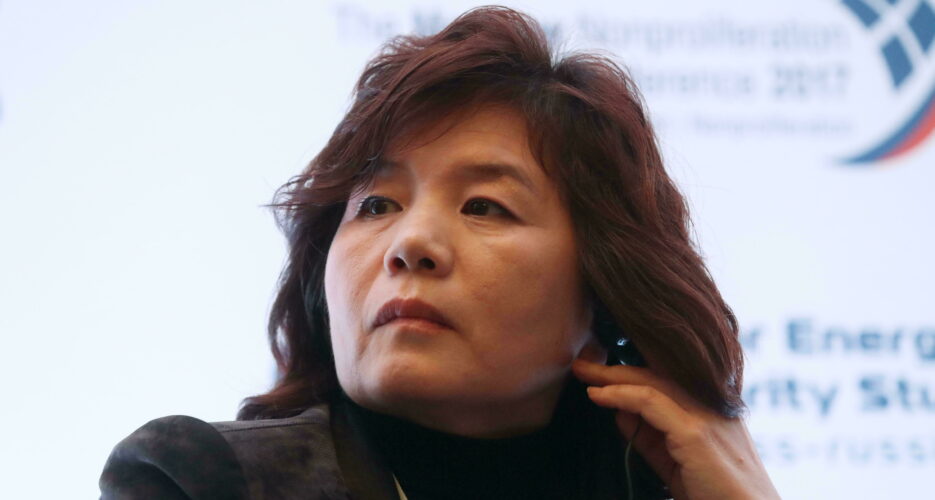 U.S. actions in the coming days and weeks will decide if Washington and North Korea meet in a “nuclear-to-nuclear showdown” or at an upcoming summit, vice-minister of DPRK Foreign Affairs Choe Son Hui said on Thursday.

The statement was issued in response to an interview by U.S. Vice President Mike Pence with Fox News on Monday, the senior North Korean official explained.

That interview saw the Vice President warn that North Korea may face regime change “if Kim Jong Un doesn’t make a deal,” and reiterate the necessity of the DPRK’s complete and verifiable and irreversible denuclearization (CVID).

“We will neither beg the U.S. for dialogue nor take the trouble to persuade them if they do not want to sit together with us,” Choe said in an English-language statement issued by KCNA on Thursday.

“Whether the U.S. will meet us at a meeting room or encounter us at nuclear-to-nuclear showdown is entirely dependent upon the decision and behavior of the United States,” she continued.

Choe said she will make a proposal to North Korean leader Kim Jong Un to reconsider its participation in the summit with the U.S., scheduled to be held on June 12 in Singapore, should U.S. threats continued.

“In case the U.S. offends against our goodwill and clings to unlawful and outrageous acts, I will put forward a suggestion to our supreme leadership for reconsidering the DPRK-U.S. summit,” she said, describing Pence’s comments as “unbridled and impudent remarks.”

Before being promoted to vice foreign minister, Choe served as director general of the North American Department of the DPRK Foreign Ministry and engaged in several back-channel talks with U.S. officials.

“I cannot suppress my surprise at such ignorant and stupid remarks gushing out from the mouth of the U.S. vice-president,” Choe said.

“If he is vice-president of ‘single superpower’ as is in name, it will be proper for him to know even a little bit about the current state of global affairs and to sense to a certain degree the trends in dialogue and the climate of detente.”

Choe on Thursday denounced Pence for comparing the North to Libya, saying the Vice President “again spat out nonsense” by suggesting the North may face the same fate as Libya – a comparison also made by National Security Adviser John Bolton in recent weeks.

“To borrow their words, we can also make the U.S. taste an appalling tragedy it has neither experienced nor even imagined up to now,” Choe said.

The DPRK senior diplomat also cast doubt on U.S. intentions to hold a summit with Kim Jong Un, claiming that it was the Trump administration that had asked for dialogue with the North Korean leader.

“But now it is misleading the public opinion as if we have invited them to sit with us,” Choe said. “I only wonder what is the ulterior motive behind its move and what is it the U.S. has calculated to gain from that.”

This is not the first time that a senior North Korean diplomat has suggested the country may “reconsider” its participation in the planned summit with the U.S.

Neither Kim Kye Kwan nor Choe Son Hui made direct mention of the U.S. President, however, who on Tuesday suggested that DPRK-U.S. summit might not go ahead as planned.

Asked on Wednesday whether the meeting would go ahead, Trump told reporters: “It could very well happen. Whatever it is, we’ll know next week about Singapore. And if we go, I think it will be a great thing for North Korea.”

NK Pro analyst Fyodor Tertitskiy said Thursday’s comments were part of the “opinion piece strategy” used by Pyongyang when it wants to deliver a message without it strictly being seen as state policy.

“The fact that the text was signed by Ms. Choe does not mean it was actually written by her. It is not like a vice-minister can just publish an opinion piece in the DPRK without proper authorization,” he said.

“This shows that this is serious, but since it is not articulated by the Minister of Foreign Affairs or by Kim Jong Un, it is still not the final stance of Pyongyang.”

U.S. actions in the coming days and weeks will decide if Washington and North Korea meet in a “nuclear-to-nuclear showdown” or at an upcoming summit, vice-minister of DPRK Foreign Affairs Choe Son Hui said on Thursday. The statement was issued in response to an interview by U.S. Vice President Mike Pence with Fox News on Monday, the senior North Korean official explained.   That