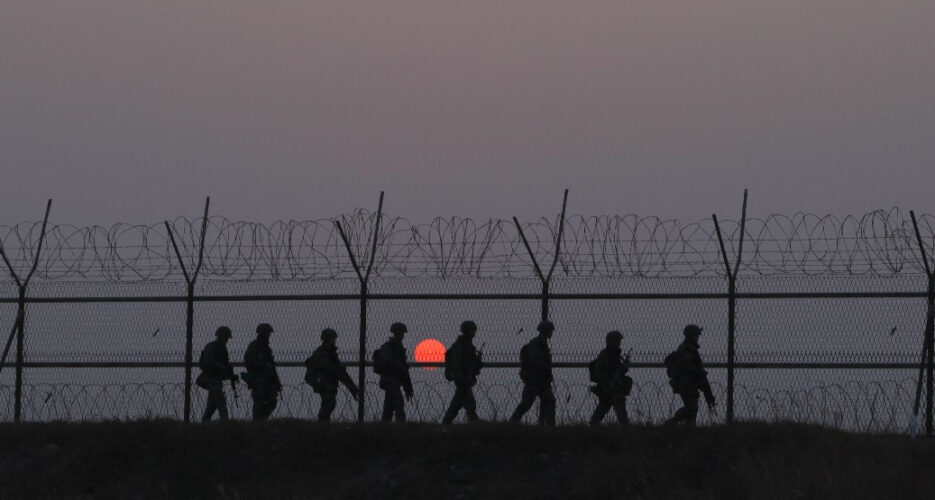 Seoul will tomorrow remove propaganda loudspeakers along the inter-Korean border, the country’s military announced on Monday, three days after the Panmunjom Declaration saw the two countries agree to work towards a peace treaty.

Spokesperson for the Ministry of National Defense (MND) Choi Hyun-soo said the move represented a first step towards building trust between Seoul and Pyongyang.

“From May 1, our military will start to pull down broadcasting facilities of loudspeakers toward North Korea in the areas along the Military Demarcation Line preferentially as a follow-up measures to the Panmunjom Declaration,” Choi said at a regular news briefing.

The defense ministry, however, has not provided additional details on whether Seoul will completely remove the speakers and how many will be pulled down.

The spokesperson said the military considered the move “the easiest part and rudimentary step for building military trust.”

“Our military has been making a full-preparation to take follow-up measures to implement the Panmunjom Declaration while maintaining firm military readiness posture,” Choi told assembled media, adding that the military has been discussing “a variety of measures” for further trust-building.

Friday saw Seoul and Pyongyang agree to “completely cease all hostile acts against each other in every domain, including land, air and sea.”

The two Koreas pledged to transform the demilitarized zone (DMZ) into a peace zone by “ceasing as of May 1 this year all hostile acts and eliminating their means, including broadcasting through loudspeakers and distribution of leaflets” near the Military Demarcation Line (MDL).

Seoul and Pyongyang are however yet to hold any working-level talks on removing the propaganda speakers, the defense military said, and Tuesday’s move is a pre-emptive one by the South.

Spokesperson Choi explained that the ROK military expects that Pyongyang will respond in kind.

Seoul last week halted anti-North broadcasting through loudspeakers on the border to ease military tensions ahead of the 2018 inter-Korean summit.

The ROK military late last year toned down criticism of Pyongyang in the broadcasts, with the Moon administration reportedly ordering the department in charge of psychological operations (PSYOP) to remove mentions of DPRK leader Kim Jong Un from the announcements.

The full-scale halt came over two years after the Park Geun-hye administration’s resumption of propaganda broadcasts in January 2016 in response to Pyongyang’s fourth nuclear test.

Regarding Friday’s agreement to stop the sending of propaganda flyers, the defense ministry on Monday said the ROK military has not sent any leaflets to the North since 2010.

The MND, however, said the agreement would likely not see Seoul prohibit private organizations from sending anti-DPRK leaflets to the North.

The defense ministry is still waiting for a North Korean response to the South’s July 2017 proposal for military talks.

Choi said inter-Korean cooperation projects on the border, including on forest fire and flood prevention, would on the agenda at the planned military meeting, which would be the first since October 2014.

Seoul will tomorrow remove propaganda loudspeakers along the inter-Korean border, the country's military announced on Monday, three days after the Panmunjom Declaration saw the two countries agree to work towards a peace treaty.Spokesperson for the Ministry of National Defense (MND) Choi Hyun-soo said the move represented a first step towards building trust between Seoul and Pyongyang.