South Korea seeking peace deal with North, ROK official says
No confirmation whether agreement will be included in next week's joint declaration, however
Dagyum Ji April 18, 2018 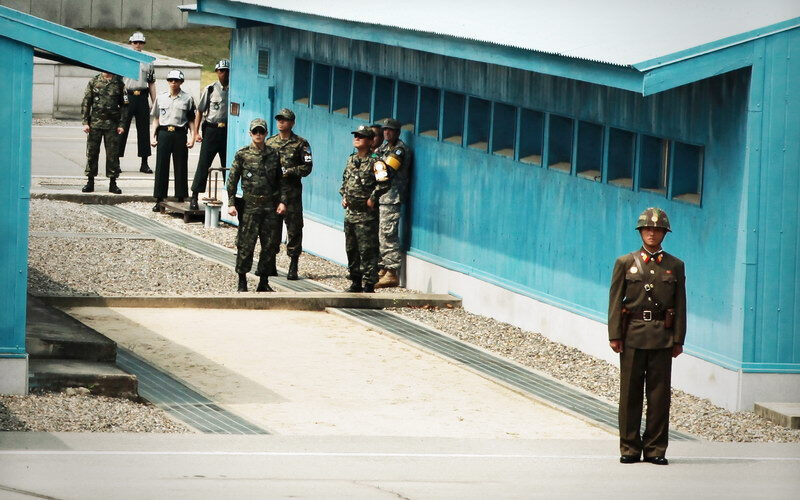 South Korea hopes to establish a “peace regime” on the peninsula and to replace the 1953 Armistice Agreement with a peace treaty, a senior ROK official said on Wednesday.

“We are reviewing ways to change the armistice agreement on the Korean peninsula to a peace regime,” the official – who the Blue House has asked remain anonymous – told media at a closed-door briefing.

The news follows comments by U.S. President Donald Trump that reported plans by the two Korea to hold talks to “see if they can end the war” had his “blessing.”

Wednesday saw the Blue House official say that Seoul expects the two Koreas to first reach a deal before consulting other parties involved.

“We have reviewed and discussed various ways to ultimately develop the current security situation of the Korean peninsula into a peace regime,” they said. “The agreement should be made between the parties directly involved.”

Any agreement to formally end the Korean War, however, would ultimately require the approval of other signatories to the armistice agreement: the United Nations Command (UNC) – led by the United States – and China.

“A trilateral or four-party agreement if necessary is possible, as there are differing views on whether the armistice system can be converted into a peace regime only based on the inter-Korean agreement,” the official added.

North Korean leader Kim Jong Un in March said the DPRK “doesn’t have any intention of taking any military action against South Korea” during a visit by ROK special envoys to Pyongyang.

The senior official, however, would on Wednesday not say whether the agreement will be included in a joint declaration to be issued after the upcoming inter-Korean summit.

“We are not sure whether the expression of the end of the war will be certainly used at the South-North summit, we hope that an agreement to prohibit hostile acts between the two Koreas will be reached,” they added.

“We are taking a cautious approach as it can’t be decided on our will, but we still hope that such expressions will be reflected in the agreement.”

The two Koreas affirmed their commitment to a “peace regime” in a joint declaration following the second inter-Korean summit in October 2007.

“The South and the North share a view to terminate the existing armistice regime and to build a permanent peace regime, and cooperate to pursue issues related to declaring the end of the Korean War by holding on the Korean Peninsula, three or four party summits of directly-related sides,” the October 4 Joint Declaration reads.

Seoul has said it plans to focus on three key issues at next week’s summit: complete denuclearization, the establishment of a permanent peace settlement, and the radical improvement of the DPRK-ROK relationship.

When asked how Seoul would reach a consensus on the issue of the denuclearizing the Korean peninsula given the disparate positions of the North and the U.S., it was suggested that the topic had already been discussed with Kim Jong Un.

“The South and North have a non-aggression agreement which was already signed in 1992,” the official said – a reference to the Joint Declaration of the Denuclearization of the Korean Peninsula.

“We have reviewed how to include what Chairman Kim told us directly in the declaration,” they added, without providing further details.

Speaking at the briefing, the official also said the Moon administration has held “a variety of discussions” on ways that Washington could guarantee the DPRK regime’s security.

“We have researched and reviewed various ways to establish peace on the Korean peninsula, and one of the ways is to how to alleviate the North’s concerns.”

South Korea hopes to establish a "peace regime" on the peninsula and to replace the 1953 Armistice Agreement with a peace treaty, a senior ROK official said on Wednesday.“We are reviewing ways to change the armistice agreement on the Korean peninsula to a peace regime,” the official - who the Blue House has asked remain anonymous - told media at a closed-door briefing.The news follows