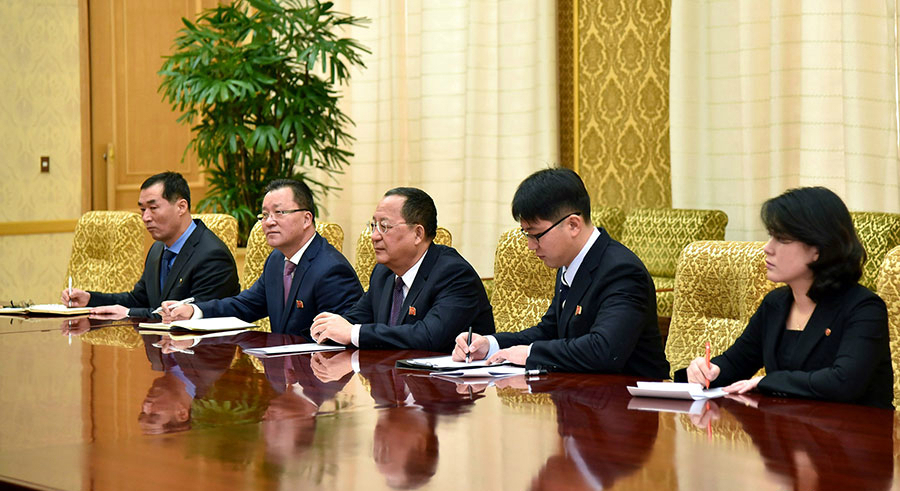 Correction at 2145 KST: A previous version of this article suggested that Choe Kang Il would also be heading to Sweden – that remains unclear, and it has been amended to reflect that fact.

North Korean foreign minister Ri Yong Ho is on his way to Sweden for a two-day trip, the Swedish Ministry for Foreign Affairs announced on Thursday.

Ri arrived at Beijing Capital International Airport this afternoon and will stay in Sweden until Friday.

“The talks will focus on Sweden’s consular responsibilities as a protecting power for the United States, Canada and Australia,” Stockholm’s foreign ministry said in a written statement, adding that he will meet with Swedish Minister for Foreign Affairs Margot Wallström.

“They will also address the security situation on the Korean Peninsula, which is high on the Security Council agenda,” it continued.

Sweden is serving as a non-permanent member of the UN Security Council (UNSC) until the end of the year, and the country’s embassy in Pyongyang provides consular services for the U.S., Australia, and Canada.

Ri was accompanied at Beijing airport by Choe Kang Il, who serves as deputy director general for North American affairs at the DPRK Ministry of Foreign Affairs, though it is unclear whether he too will be traveling to Sweden.

Ri’s visit comes almost a week after the surprise revelation that U.S. President Donald Trump has agreed to meet with North Korean leader Kim Jong Un “by May.”

Outgoing U.S. Secretary of State Rex Tillerson on Monday said that Washington would seek to “find a nice neutral site where both parties will be confident” for the upcoming talks.

Ri’s visit to Sweden has been in the works for several months, sources told NK News this week, with one saying there had even been plans for him to meet with Tillerson.

The North’s state-run Korean Central News Agency (KCNA) in January reported that the delegation would “have an exchange of views with the Swedish side on bilateral relations and DPRK-EU relations.”

During their visit, North Korean diplomats held talks with Prime Minister Stefan Löfven and a state secretary for the Swedish foreign ministry, while paying a courtesy call on Wallström.

The delegation left Pyongyang on January 27 and returned home on February 6.

Swedish special envoy Kent Rolf Magnus Harstedt and his party had earlier visited the DPRK between December 19 and 21, according to KCNA.

KCNA said the two had discussed “expanding the bilateral relations in various fields and exchange of views on the recent situation of the Korean peninsula.”

Meanwhile, South Korean foreign minister Kang Kyung-hwa is in the U.S. until Saturday, and is scheduled to meet with Acting Secretary of State John Sullivan on Friday.

Seoul said the invitation demonstrated the “high interest and support of the EU in the issues of the Korean peninsula.”

Kang will deliver a speech on the situation on the Korean peninsula and on progress in DPRK-ROK relations, as well as asking for “continued support and cooperation” with Seoul’s diplomatic efforts.

Correction at 2145 KST: A previous version of this article suggested that Choe Kang Il would also be heading to Sweden - that remains unclear, and it has been amended to reflect that fact.North Korean foreign minister Ri Yong Ho is on his way to Sweden for a two-day trip, the Swedish Ministry for Foreign Affairs announced on Thursday.Ri arrived at Beijing Capital International Airport