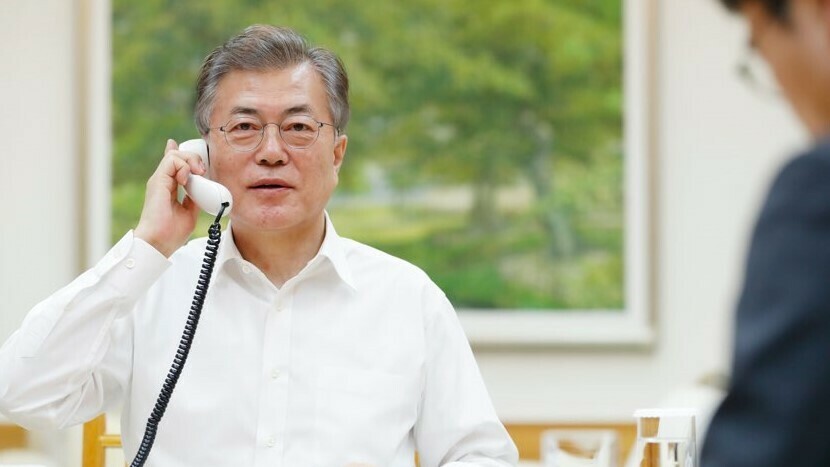 Moon told U.S. President Donald Trump about the news during their first phone conversation since Seoul’s recent high-level talks with DPRK officials in the South.

“The two leaders agreed to continue their efforts to maintain the momentum for South-North dialogue so it may lead to the denuclearization of the Korean Peninsula,” South Korean Presidential Senior Secretary for Public Relations Yoon Young-chan said in a written statement.

“President Moon announced his plan to dispatch a special envoy before long… to confirm the discussions that were held during the visit of the North Korean high-level delegation to South Korea,” he continued. “Both leaders agreed to closely consult the progress of the South-North dialogue in the future.”

The Blue House did not provide additional details on when the envoy would head to Pyongyang, but the trip would represent the most high-profile visit to the North Korean capital since 2007, when former South Korean President Roh Moo-hyun met with former DPRK leader Kim Jong Il.

“Presidents Moon and Trump apparently have come to an agreement on the ground rules for establishing an inter-Korean dialogue,” Ken Gause, a North Korean leadership expert at the CNA Corporation told NK News.

“President Moon has hinted at what those might be, but they have not been made public. I suspect that the engagement strategy revolves around the two-step strategy of securing a freeze first, eventually followed by concrete steps toward denuclearization.”

A summit between Seoul and Pyongyang would also likely require an extensive diplomatic back and forth, and South Korea’s special envoy will likely be tasked with laying the groundwork for Moon’s as yet unconfirmed visit, proposed by the North last month.

“If the summit is going to happen, there will have to be a complex process of preparation—for example with respect to the agenda—and an envoy is clearly the first step in that process,” Stephan Haggard, director of the Korea-Pacific Program at IR/PS told NK News.

Relations between the two Koreas have warmed following Pyongyang’s surprise decision to send both sporting and political delegations to the PyeongChang Winter Olympics in South Korea.

The first delegation was led by North Korean leader’s Kim Jong Un’s sister, Kim Yo Jong, who invited Moon to Pyongyang for a summit.

Although no time frames were given, North Korea said the visit should happen as soon as possible.

A second delegation led by Kim Yong Chol, vice-chairman of the Central Committee of the Workers’ Party of Korea (WPK) and director of the United Front Department of the WPK Central Committee, attended the closing of the Olympic Games.

“[Both] agreed to share the view to continuously develop the atmosphere for reconciliation between the South and the North which was established through the PyeongChang Winter Olympics and to continue to cooperate,” Seoul’s Ministry of Unification said last week.

During the discussions, North Korea also signaled that is it open to talks to with Washington, though the U.S. responded that negotiations could only occur if Pyongyang was willing to discuss denuclearization.

Speaking last week, Trump said the U.S. had been attempted to speak to North Korea for 25 years, with little to show for it.

The White House press release on the call between Moon and Trump also did not mention the special envoy, saying only that the South Korean president briefed his U.S. counterpart.

“It is not clear how invested the U.S. is in this approach. But I suspect that Washington has given Seoul the go-ahead to try and see how it goes. If it fails, the U.S. is better positioned to argue for more stringent measures,” Gause told NK News.

South Korean President Moon Jae-in will soon send a special envoy to the North Korean capital, South Korea's Blue House announced on Friday.Moon told U.S. President Donald Trump about the news during their first phone conversation since Seoul's recent high-level talks with DPRK officials in the South.“The two leaders agreed to continue their efforts to maintain the momentum for