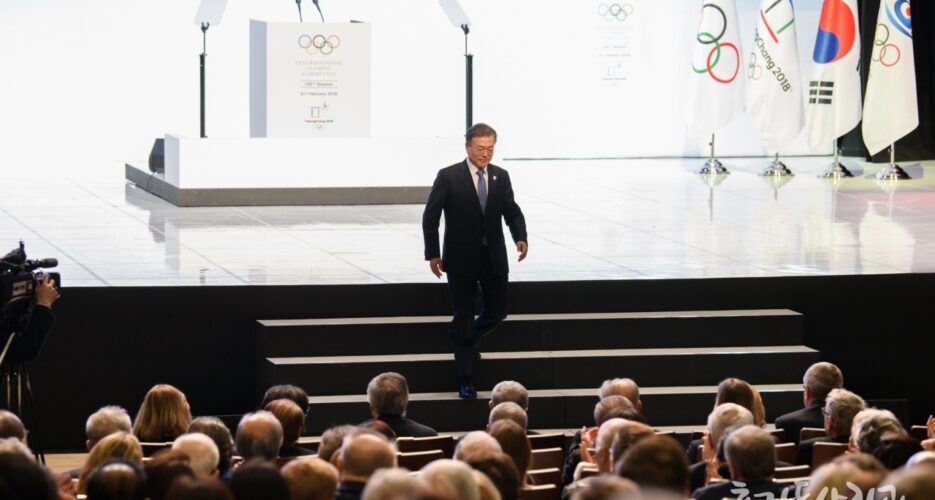 South Korean President Moon Jae-in on Friday called on world leaders to put efforts into peacebuilding on the Korean peninsula, at an Olympic reception at which North Korea’s Kim Yong Nam was present.

Speaking at a pre-Opening Ceremony Reception at which around 200 local and foreign VIPs were present, Moon urged participating nations to work together to ease tensions in the region.

Citing a joint North-South women’s ice hockey team, Moon said inter-Korean athletes are “now holding a small ‘snowball’ in their hands,” and that “a snowman starts with a snowball.”

“Together, we should start rolling the small snowball carefully with our hands,” he said. “Now, if we put our hearts and minds together, it will continue to grow larger and larger and turn into a snowman of peace.”

The team is scheduled to have its first match against Switzerland on Saturday at the Kwandong Hockey Centre in Gangneung, Gangwon Province.

The South Korean President said many countries, including the two Koreas, have “thorny issues” to resolve.

“Had it not been for the PyeongChang Olympics, some of us might not have had the chance to be together in the same room,” Moon said.

“We are here together and that alone will be a precious starting point for a step forward toward world peace.”

President of the Presidium of the DPRK’s Supreme People’s Assembly Kim Yong Nam participated in the event, shaking hands with Moon and posing for a photo ahead of the speech in the highest-level contact between the two Koreas in over a decade.

South Korean Presidential press secretary Yoon Young-chan said that while Japanese Prime Minister Shinzo Abe had shaken hands and had a brief conversation with Kim, Pence did not.

Yoon also said Seoul had been informed that Pence left the event for a dinner appointment with U.S. athletes starting at 1830 local time.

Neither Abe or Pence were part of a group photo with other leaders which included Kim Yong Nam, the South Korean presidential office added.

Guterres and Kim, Yoon added, had a conversation “for a quite long time.”

The possibility of Kim and Pence crossing paths at Pyeongchang has raised questions over whether the two will meet.

North Korea’s foreign ministry, however, on Thursday said its delegation was not interested in meeting with U.S. officials during the Winter Olympics.

During a three-day visit to the ROK, Pence has emphasized the importance of the ongoing campaign of pressure and sanctions on the North.

Moon and Pence held a meeting on Thursday and “reaffirmed the principle of making the North come forward dialogue for denuclearization through maximum pressure and sanctions,” the Blue House said.

Ahead of the reception on Friday, Pence and the late Otto Warmbier’s father Fred met a group of North Korean defectors at the ROK Navy 2nd Fleet Command in Pyeongtaek.

“There is no daylight between South Korea and the United States. We don’t want to repeat the mistakes of the past,” Pence said in a statement carried by Yonhap News Agency.

Pence will attend the opening ceremony with the parents of the late Otto Warmbier, who died after returning from extended captivity in North Korea – and said on Monday that they “remind the world of the atrocities happening” in the DPRK.

The high-level North Korean delegation kicked off a three-day visit to the South on Friday, landing at Incheon International Airport at around 1345 local time on Kim Jong Un’s private ‘PRK-615’ jet.

South Korean officials held a short meeting with the North Korean delegates at the airport before the group headed to PyeongChang.

Kim Yo Jong, the first member of the Kim family to visit South Korea, also serves as the first vice director of the Central Committee of the Workers’ Party of Korea (WPK).

President Moon will meet and hold a lunch with Kim Yo Jong, Kim Yong Nam, Choe and Ri at the Presidential Office in Seoul on Saturday, the Blue House confirmed to media on Friday.

South Korean President Moon Jae-in on Friday called on world leaders to put efforts into peacebuilding on the Korean peninsula, at an Olympic reception at which North Korea's Kim Yong Nam was present.

Speaking at a pre-Opening Ceremony Reception at which around 200 local and foreign VIPs were present, Moon urged participating nations to work together to ease tensions in the region.