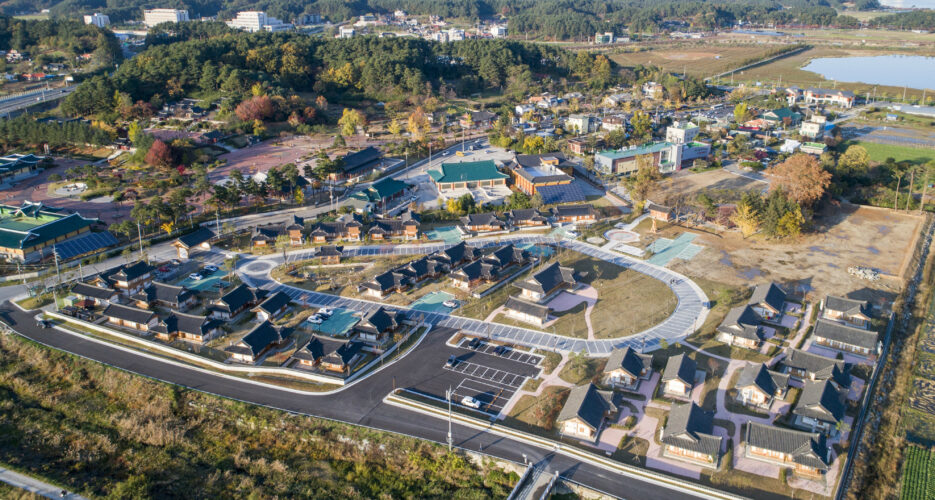 The mayor of Gangneung, South Korea on Thursday announced plans to provide accommodation for an upcoming North Korean delegation to the PyeongChang Olympics in February.

Choi Myeong-hee made the statement at a news conference two days after inter-Korean talks at the truce village of Panmunjom resulted in the announcement that Pyongyang would send a high-level delegation to the games.

The 2018 Winter Olympics’ ice sports matches will be held in Gangneung, which is home to five stadiums.

“I warmly welcome that North Korea’s participation in 2018 PyeongChang Winter Olympics was confirmed at the South-North high-level meeting as mayor of the host city of the Olympics,” Choi said in a written statement.

“We are willing to provide Gangneung Ojuk Hanok Village… for the delegation including North Korean cheering and performing art squads.”

He said the city had decided to “contribute to ‘Peace Olympics’ by solving the issue of accommodations, transportation, and security caused by the dispatch of the delegation.”

Pyongyang on Tuesday agreed to dispatch a high-level delegation, members of its National Olympic Committee, athletes, a cheering squad, a cultural performance troupe, a Taekwondo demonstration group, spectators, and reporters in a joint press statement issued after the high-level talks held on January 9.

The city also said it would be “easy” to guarantee the security of the North Korean delegation during their stay.

South Korea’s Ministry of Unification (MOU) on Thursday said further details on the North’s participation will be confirmed after a “four-party meeting” in Lausanne, Switzerland convened by the International Olympic Committee (IOC) later in the month.

Delegates of the National Olympic Committees of Seoul and Pyongyang, along with representatives of the PyeongChang 2018 Organising Committee, will meet on January 20.

“The meeting will have to take a series of essential decisions, including the number and names of athletes and officials from the NOC of the DPRK, since all the deadlines for registration have already passed,” the IOC said in a written statement released on Wednesday.

The IOC will also decide on the format of participation and issues related to Olympic protocol, including the flags, anthems, ceremonies, and uniforms to be used during the games.

Seoul says a working-level inter-Korean meeting will be held ahead of the four-party meeting.

“The South and the North are aware of the urgency of [the discussion] over the North’s participation in PyeongChang Olympics,” an official at the ministry – who wished to remain anonymous – told media at a closed-door briefing.

Issues including “the scale and name of the Olympic squad, national anthem, and flag” will be on the agenda at the working-level, the official said.

The scale of the delegation also remains an open question. South Korean Prime Minister Lee Nak-yon on Wednesday said Seoul expected that Pyongyang would dispatch between 400 to 500 people, the MOU said the two Koreas “haven’t had a detailed discussion” over the issue.

“He made the comment considering the size of the delegation dispatched by the North in the past.”

The unification ministry is also yet to say whether financial support for a DPRK delegation would violate international sanctions, with Seoul this week insisting it will closely discuss the issue with the international community to avoid a dispute.

While the MOU is in the process of organizing a follow-up meeting with the North, the Ministry of National Defense (MND) on Thursday said it was yet to discuss military talks with Pyongyang.

Choi Hyun-soo, a spokesperson for the defense ministry, said that technical issues with the inter-Korean communication channel on the west coast were preventing an exchange of views on military talks.

Meanwhile, the Ministry of Foreign Affairs (MOFA) on Thursday said Seoul expects to hold talks on “various issues” with U.S. Vice President Mike Pence when he visits the South in February as part of a Presidential Delegation to the Winter Olympics.

The White House on Wednesday announced that the U.S. would dispatch Pence, who will attend the opening ceremony held on February 9 and visit Seoul with a delegation which will include members of President Trump’s family.

“The Vice President is traveling to the Olympic Games in South Korea to reinforce the strong U.S. presence on the Korean Peninsula and send a clear message of American resolve to the North Korean regime,” said Jarrod Agen, Deputy Chief of Staff to Vice President Pence.

“In addition to showing support for our U.S. athletes, the Vice President will show his confidence in and appreciation for our U.S. military stationed in the region.”

The mayor of Gangneung, South Korea on Thursday announced plans to provide accommodation for an upcoming North Korean delegation to the PyeongChang Olympics in February.

Choi Myeong-hee made the statement at a news conference two days after inter-Korean talks at the truce village of Panmunjom resulted in the announcement that Pyongyang would send a high-level delegation to the games.