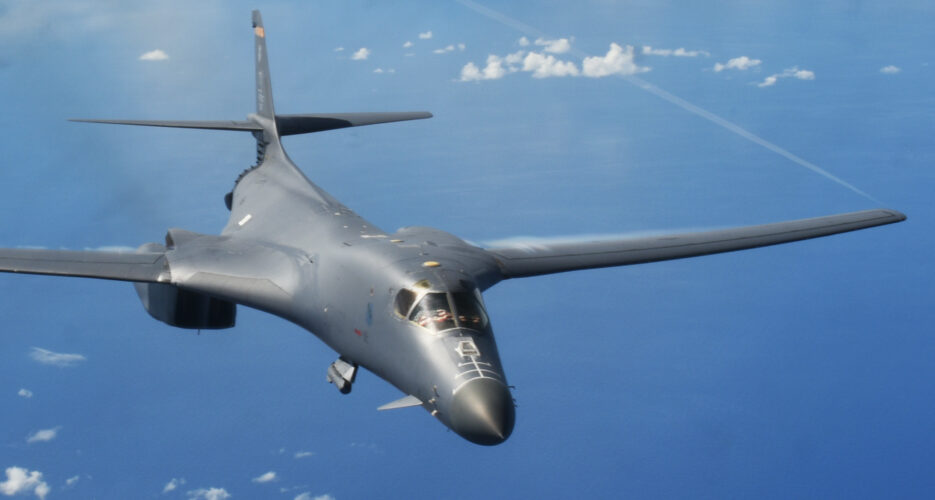 The bombers were dispatched from Andersen Air Force Base in Guam and flew over the Korean peninsula, reportedly staging simulated bombing drills while flying in formation with around 20 aircraft participating in the annual “Vigilant Ace” air combat drill.

U.S. stealth fighter jets were not mobilized in Thursday’s exercise, the military said, which saw the two strategic bombers enter the Korea Air Defense Identification Zone (KADIZ), fly to Jeju island and up the west coast, before returning to Andersen Air Force Base.

The drill comes a day after one B-1B supersonic bomber staged a simulated bombing exercise with two F-22 Raptors and four F-35A and F-35B Lightning II stealth fighter jets on the east coast.

One B-1B strategic bomber was deployed on the Korean peninsula to carry out the U.S Pacific Command’s “Continuous Bomber Presence (CBP) mission,” U.S. Air Force confirmed to NK News, adding that the drill was not part of Vigilant Ace 18.

The rare two consecutive days of virtual bombing drills on the Korean peninsula come on the fourth day of the Vigilant Ace 18 exercise, in which 230 aircraft, including F-16 Fighting Falcons and EA-18G Growlers, have been mobilized for a five-day air combat exercise which runs until Friday.

The Chinese Ministry of Foreign Affairs on Wednesday expressed concerns over the continued deployment of U.S. strategic assets.

“We keep stressing that the current situation on the Korean Peninsula is tense and sensitive,” foreign ministry spokesperson Geng Shuang told media during a regular briefing.

“We hope that all relevant parties could exercise restraint and refrain from heightening tensions on the Korean Peninsula and provoking each other.”

North Korean state media – which describes the B-1B Lancer as a nuclear strategic bomber – denounced the exercise over the weekend.

A spokesman for the ruling party-linked Committee for the Peaceful Reunification of the Country (CPRC) on Sunday warned of “terrible retaliation” in response to the drills.

Wednesday also saw a spokesperson for the DPRK Ministry of Foreign Affairs say Pyongyang would not avoid a war with Washington, criticizing recent “reckless remarks” by high-level American politicians.

“We do not wish for a war but shall not hide from it,” a spokesperson said, in response to a question from a KCNA journalist.

“Should the U.S. miscalculate our patience and light the fuse for a nuclear war, we will surely make the U.S. dearly pay the consequences with our mighty nuclear force which we have consistently strengthened.”

Graham told CBS’s Face the Nation on Sunday that a preemptive war against the North was “becoming more likely” as its weapons technology “matures.”

The North Korean spokesperson described the remark as an “alarming sign,” given the statements were made amid the “largest-ever joint aerial drill.”

“Series of violent war remarks coming from the U.S. high-level politicians amid such circumstances have made an outbreak of war on the Korean peninsula an established fact,” the spokesperson said. “The remaining question now is: when will the war break out.”

Two B-1B Lancer strategic bombers on Thursday conducted drills on the western coast of the Korean peninsula, a South Korean military officer confirmed to NK News.The bombers were dispatched from Andersen Air Force Base in Guam and flew over the Korean peninsula, reportedly staging simulated bombing drills while flying in formation with around 20 aircraft participating in the annual “Vigilant