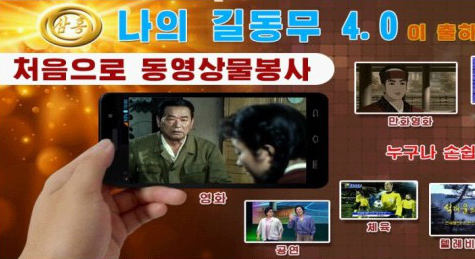 According to the article, the Samhung IT Exchange Company “newly developed… My Companion 4.0” after version 3.3 of the application became popular among users.

My Companion 4.0 runs on smartphones or tablet PCs, and is reportedly a “comprehensive” app which can read E-books, watch recorded broadcasts and videos, and play games, the DPRK Today said.

“To actively provide conveniences for users, many new and convenient functions are added,” the outlet reported, with its most major development being that users of the new version can watch videos.

Screenshots and an advertisement for the application provided by DPRK Today showed that users can watch a variety of videos: movies, soap operas, performances, sports matches, cartoons, broadcast recordings, foreign language courses, and educational programs, among other uses.

The DPRK Today said users can “purchase” programs and online content, but the report does not say precisely how.

“Providing the services of video content for the first time,” the catchline reads, saying that anyone can “easily” browse and watch the videos. “The product will be free of charge once purchase and they will not be subject to capacity restrictions.”

A screengrab also showed that the Samhung IT Exchange Company is selling games on the My Companion 4.0 platform, with a store featuring a variety of games, including “Special operations force” and “Construction of future city” listed by popularity and release date.

The company also has a “newly updated” E-book reader with a “night mode,” in which users turn pages by swiping their finger and zooming in and out. They can also search for specific words while reading books and preview pages.

Users can access a wide range of books, including foreign literature and professional books, as well as check titles, date, and the pages of books recently read.

“My Companion 4.0 caught popularity among users as soon as it was launched because of a sophisticated user interface, new service on video and abundant data,” the DPRK Today reported.

The program also provides a so-called “multi-functional wallet management,” but no details are given about what precisely this means.

Based on previous reports, streaming videos is a relatively new addition to the app.

The previous version “My Companion 2.0” can be installed on a mobile phone and tablet PC and provides an E-book of more than 600 publications “ranging from socio-political to cookery and science and technology books,” the Korea Central News Agency (KCNA) reported in August 2015.

A North Korean company has released new Netflix-style services for smartphone and Tablet PC users, state media outlet DPRK Today reported this week. According to the article, the Samhung IT Exchange Company “newly developed... My Companion 4.0” after version 3.3 of the application became popular among users. My Companion 4.0 runs on smartphones or tablet PCs, and is reportedly a