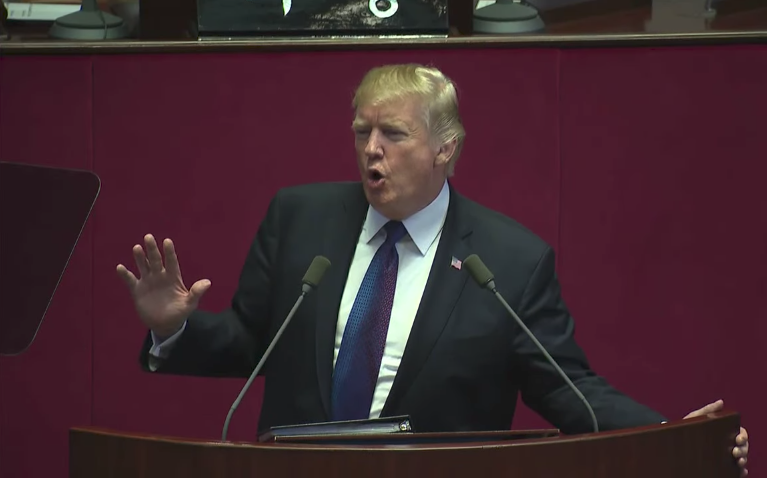 U.S. President Donald Trump urged North Korea to relinquish its nuclear program and warned that Washington will not allow Pyongyang to threaten it and its allies in a speech to South Korea’s National Assembly on Wednesday.

Speaking on the second day of a two-day visit to the Republic of Korea, Trump told lawmakers and diplomats that while previous U.S. administrations had displayed “restraint” towards Pyongyang, his was “a very different administration.”

“Do not underestimate us. Do not try us,” the President said. “America does not seek conflict, but we will never run from itWe will not permit America or our allies to be blackmailed or attacked, we will not allow American cities to be threatened with destruction.”

“The world cannot tolerate the menace of a rogue regime that threatens us with nuclear devastation.”

In comments echoing ongoing U.S. efforts to isolate Pyongyang, Trump also urged world nations to do more to put pressure on the country – notably singling out China and Russia and asking them to “fully implement UN Security Council resolutions.”

He also called on countries to “downgrade diplomatic relations, and end all trade” with North Korea.

“The longer we wait, the greater the danger grows,” he said. “To those nations that ignore this threat, the weight of this crisis is on you.”

In comments that are likely to elicit a strong response from North Korea, the President also attacked the DPRK for its repressive political system, describing a “twisted regime” whose leaders pursue “fascism and tyranny.”

“100,000 North Koreans suffer in gulags,” Trump said. “People of faith are detained and tortured, and in many cases, executed.”

Calling the DPRK a “military cult,” the President warned that North Korean leaders possessed a “deranged belief” in the possibility of forcible reunification of the peninsula.

“North Korea is a hell that no person deserves,” he added.

He then spoke directly to Kim Jong Un, warning the DPRK leader that the country’s ongoing nuclear and ballistic missile development was not making it safer, and that continued WMD development was “putting your regime in grave danger, every step increases the peril.”

Despite the “crimes” of the North Korean leader, Trump said, the U.S. was willing to offer the DPRK a path to a “brighter future.”

“It begins with an end to aggression, a stop to your development of ballistic missiles, and complete, verifiable denuclearization,” he said. “We seek a future of light, prosperity, and peace, we will only discuss this with North Korea if they cease their threats.”

One expert told NK News that Trump’s speech was simply a reflection of current U.S. policy, but that he believed the President had “struck the right tone.”

“His remarks reflect the North Korea policy his administration has already articulated,” said Mintaro Oba, a former Korea Desk Officer at the U.S. Department of State. “In an ideal world, he would have used the speech to more strongly signal his willingness to talk with North Korea. But this is the Trump administration, where not rocking the boat and not starting a war is a victory.”

“I think North Korean reaction will be pretty negative, but also routine.”

The speech follows a joint press conference with South Korean President Moon Jae-in on Tuesday, in which Trump urged North Korea to come to negotiating table while saying the U.S. kept “all options” on the table.

The visit is Trump’s first to Asia since his inauguration. He arrived in Japan on Sunday, holding a joint press conference with Prime Minister Shinzo Abe the following day.

He also met with the families of Japanese citizens kidnapped by North Korea, having referenced the case of Megumi Yokota during his first speech to the UN General Assembly in September.

Trump’s visit to Japan and South Korea has coincided with both countries implementing new unilateral sanctions against North Korea.

The President now heads to Beijing for talks with Chinese President Xi Jinping. He then travels to Vietnam and the Philippines, before returning to Washington DC next Tuesday.

U.S. President Donald Trump urged North Korea to relinquish its nuclear program and warned that Washington will not allow Pyongyang to threaten it and its allies in a speech to South Korea's National Assembly on Wednesday.

Speaking on the second day of a two-day visit to the Republic of Korea, Trump told lawmakers and diplomats that while previous U.S. administrations had displayed "restraint" towards Pyongyang, his was "a very different administration."