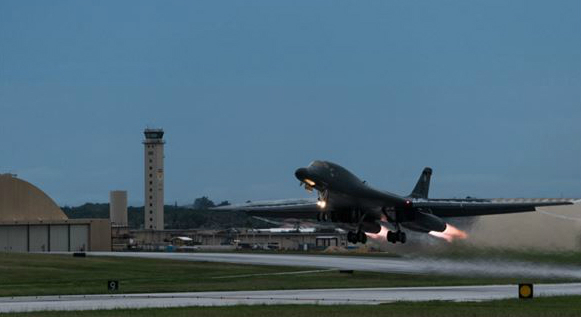 The JCS said two F-15K fighter jets of the Republic of Korea Air Force (ROKAF) and two U.S. B-1B strategic bombers took off from Andersen Air Force Base in Guam and staged a joint training exercise.

“The formation of the U.S. B-1B [Lancer bombers] conducted simulated air-to-surface missile-firing drill over the East Seas after entering the KADIZ (Korea Air Defense Identification Zone),” the JCS said in a written statement.

“[The U.S. bombers] staged virtual air-to-ground missile-firing drill over the West Sea once more after passing through the inland areas while receiving the protection from the formation of South Korean F-15K [fighters].”

The JCS, however, stressed that the joint military exercise was “part of the regular deployment training to enhance the ability to execute extended deterrence.”

“The South Korean and the U.S. air force showed off the ally’s strong will and ability in response to the North Korean nuclear and missile threats through this exercise,” the JCS said.

“By improving the interoperability of the combined forces and the ability to conduct combined operations in peacetime and during the war, we mastered deployment capabilities of the rapid reaction forces.”

The U.S. Air Force said on Tuesday that they had conducted military drills in the vicinity of the Sea of Japan (known in Korea as the East Sea) with Japan Air Self-Defense Force (JASDF) and the ROKAF on Tuesday night.

The U.S. Airforce said the drill was the “first time” that B-1B Lancers had conducted combined training with JASDF F-15s and ROKAF F-15Ks at nighttime.

“Flying and training at night with our allies in a safe, effective manner is an important capability shared between the U.S., Japan and the Republic of Korea and hones the tactical prowess of each nations’ aviators,” said U.S. Air Force Maj. Patrick Applegate of the 613th Air Operation Center.

“This is a clear demonstration of our ability to conduct seamless operations with all of our allies anytime anywhere.”

The exercise took place ahead of a meeting between U.S. President Donald Trump, Secretary of Defense James Mattis, and Chairman of the Joint Chiefs of Staff General Joseph Dunford on Tuesday night.

“The briefing and discussion focused on a range of options to respond to any form of North Korean aggression or, if necessary, to prevent North Korea from threatening the United States and its allies with nuclear weapons,” the White House said in a statement.

The South Korean military declined to confirm what U.S. strategic assets would be involved or the schedule of the exercise.

The U.S. nuclear-powered supercarrier USS Ronald Reagan is also reportedly approaching the Korean peninsula, with U.S. Pacific Command (PACOM) announcing on Tuesday that the aircraft carrier had departed Hong Kong after wrapping up a port visit.

North Korean foreign minister Ri Yong Ho in September warned that the DPRK has “the right to shoot down United States strategic bombers even when they’re not yet inside the airspace border of our country.”

Ri made the comment during an impromptu press conference in New York after multiple U.S. Air Force B-1B Lancer bombers and F-15C Eagle fighters flew over waters off the North Korean east coast on September 23.

The U.S. Department of Defense (DoD) described the deployment as “the farthest north of the Demilitarized Zone (DMZ) any U.S. fighter or bomber aircraft have flown off North Korea’s coast in the 21st century.”

South Korean forces did not participate in the operation.

Supersonic B-1B Lancers are able to “carry the largest conventional payload of both guided and unguided weapons” and “can rapidly deliver massive quantities of precision and non-precision weapons,” according to the U.S. Air Force.

The B-1B strategic bombers were converted to only deliver conventional weapons in 2011 under the New Strategic Arms Reduction Treaty (START).