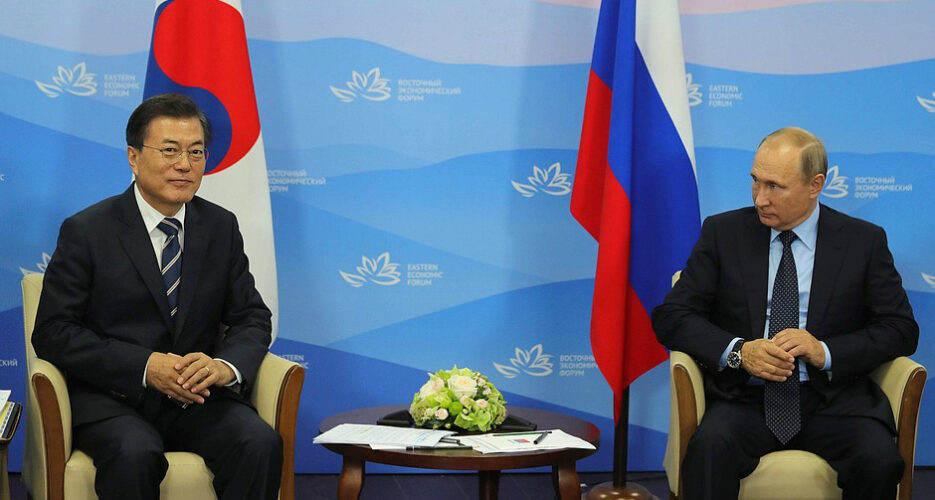 Speaking at a summit with South Korean President Moon Jae-in at the sidelines of the third Eastern Economic Forum in Vladivostok, the Russian President reiterated his view that Pyongyang will not “give up its nuclear weapons to keep its security no matter how much pressure.”

“We are also opposed to and condemn the North Korean nuclear development,” Yoon Young-chan, senior presidential secretary for public relations for the Blue House, quoted the Russian President as having said. “But I am concerned that the suspension of crude oil will hurt civilians.”

“Russia exports very little amount of petroleum to the north which is about 40,000 tons a year.”

The South Korean President reportedly told Putin that the concerned parties “must intensify the severity of the UN Security Council sanctions more to bring the North to the path of dialogue.”

“He asked Russia to actively cooperate as it is inevitable to stop the supply of crude oil to North Korea at least this time,” the Blue House added.

On Monday Moon asked Putin to “seriously consider ways to… block North Korea’s source of income of foreign currency, such as suspending supply of crude oil to North Korea and banning imports of overseas workers,” in response to Pyongyang’s sixth nuclear test on Sunday.

At a news conference following the one-on-one meeting, the South Korean and Russian Presidents agreed that economic cooperation between the two Koreas and Russia in the Far Eastern region could be a means to resolve the North Korean nuclear issue.

“I would like to say that Russia is still willing to implement trilateral projects with the participation of North Korea,” Putin told media, in a translation provided by the Kremlin. “We could deliver Russian pipeline gas to Korea and integrate the power lines and railway systems of Russia, the Republic of Korea and North Korea.”

“The implementation of these initiatives will be not only economically beneficial but will also help build up trust and stability on the Korean Peninsula.”

Moon admitted that inter-Korean economic cooperation efforts had made “no progress” because of the North Korean nuclear issue, despite there having been “much discussion.”

“I and President Putin decided to firmly establish the foundation of the trilateral cooperation among the South, the North, and Russia connecting the Korean peninsula and the Far East region,” Moon said. “We agree to push forward the cooperation projects which can be possible between South Korea and Russian with the Far Eastern region as the center.”

Russia has long been a proponent of inter-Korean cooperation. Anthony V. Rinna, an analyst on Russian foreign policy in East Asia for Sino-NK, said that the three “would obviously be restricted in what they could do” were any project to be successful.

“The use of the Rason Special Economic Zone would be a possible starting point if the three sides decided to implement something specific and concrete,” Rinna told NK News. “This, however, would be rife with possibilities for sanctions violations, such as the potential case that Russian coal shipped through Rason could become mixed with North Korean coal.”

At the news conference on Wednesday, Putin also reiterated Moscow and Beijing’s calls for the U.S. and North Korea to avoid escalatory rhetoric, skepticism of the need for further sanctions, and support for a “parallel freeze” of DPRK testing and U.S.-South Korean joint military drills.

“It is obvious that the Korean problems cannot be settled with sanctions and pressure alone,” Putin said. “We must not yield to emotions or try to drive North Korea into a corner.”

Speaking at a summit with South Korean President Moon Jae-in at the sidelines of the third Eastern Economic Forum in Vladivostok, the Russian President reiterated his view that Pyongyang will not “give up its nuclear weapons to keep its security no matter how much pressure."