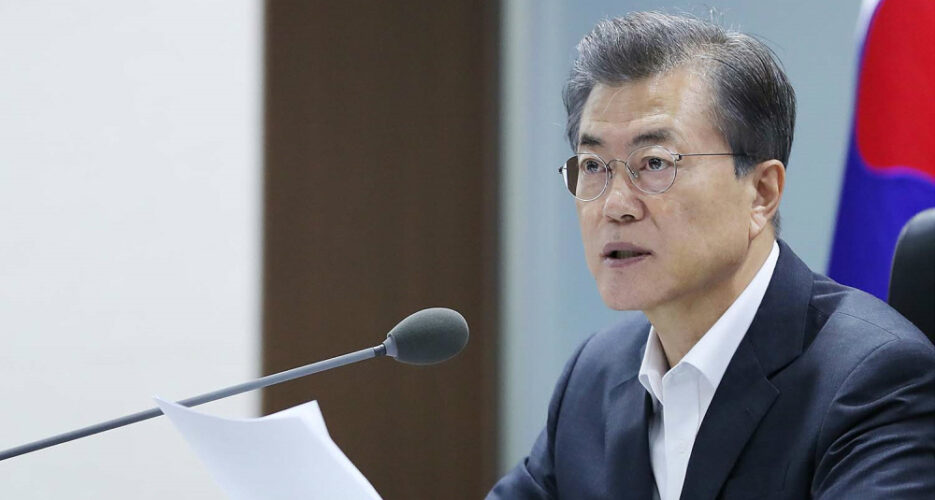 South Korean President Moon Jae-in on Friday said that dialogue with North Korea was now “impossible” and that Seoul has the military ability to make the DPRK “unable to recover.”

Moon convened a meeting of the National Security Council (NSC) at 0800 KST, almost an hour after North Korea launched a ballistic missile over Japan.

“The government will never sit and watch the provocation by North Korea, but will take effective countermeasures decisively to change the North’s behaviors in cooperation with the international community,” Moon told top aides at the meeting.

“Dialogue is impossible in a situation like this. The sanctions and pressures of the international community will be further reinforced [to make] North Korea to choose no other option but to come toward the path of the genuine dialogue.”

He also pledged that the government would “thoroughly defend” the country with the ROK’s own military powers and combined defense capabilities.

“We have the power to break North Korea into shatters… and make it unable to recover if it makes a provocation against us and our allies.”

The South Korean President called for the ROK military to enhance their military capabilities through a range of measures, including the completion of planned amendments to the 2012 missile guidelines agreed between Washington and Seoul.

U.S. President Donald Trump and Moon agreed to abolish existing payload weight limits on South Korean missiles, during a phone call on September 4 in the wake of the North’s sixth nuclear test.

“We must improve capabilities… to eliminate the threats by punishing immediately when [North Korea] makes a provocation,” Moon said on Friday.

In a report ahead of September 3 nuclear test, the North’s state-run Korean Central News Agency (KCNA) said the DPRK was considering an EMP attack against the U.S.

“The H-bomb…is a multi-functional thermonuclear nuke with the great destructive power which can be detonated even at high altitudes for super-powerful EMP attack according to strategic goals,” the KCNA reported.

The Blue House said Seoul will “actively draw up diplomatic and military countermeasures to deter the North’s further provocations.”

President Moon this morning also ordered the military to conduct a test launch of South Korea’s Hyunmoo-II ballistic missiles as a “warning shot.”

“Our military live-fired a Hyunmoo-II missiles toward the East Sea calculating the distance to Sunan airport (250 km) which is the origin of the provocation with the approval of the President at the same time that North Korea launched a missile,” South Korea’s Joint Chiefs of Staff (JCS) told media in a written statement.

North Korea on Friday launched a missile towards the Sea of Japan (East Sea) in the vicinity of Sunan, the site of Pyongyang’s international airport.

The United States Pacific Command (PACOM) said the ballistic missile “overflew the territory of northern Japan before landing in the Pacific Ocean east of Japan,” adding that its initial assessment had determined the launch was of an intermediate range ballistic missile (IRBM).

South Korea’s JCS said that the missile traveled around 3700 km at a maximum altitude of around 770km.

Friday morning’s launch is North Korea’s first since its sixth nuclear test on September 3. This is the 14th ballistic missile launch this year and the 10th since Moon took office on May 10.

South Korean President Moon Jae-in on Friday said that dialogue with North Korea was now “impossible” and that Seoul has the military ability to make the DPRK "unable to recover."

Moon convened a meeting of the National Security Council (NSC) at 0800 KST, almost an hour after North Korea launched a ballistic missile over Japan.