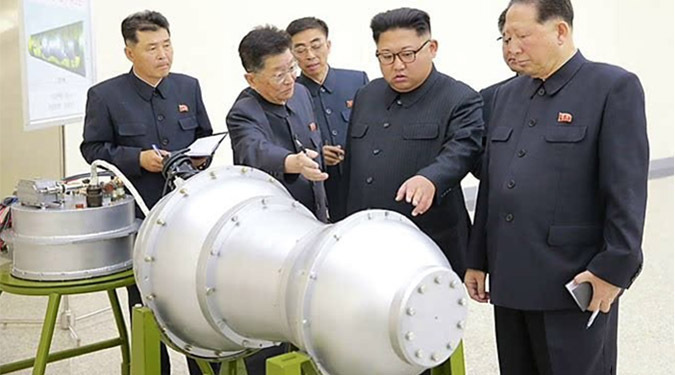 North Korea has developed a hydrogen-bomb that can be loaded onto a new intercontinental ballistic missile (ICBM), state media outlet the Korea Central News Agency (KCNA) said on Sunday.

The KCNA published photos of Kim Jong Un inspecting what was described as a thermonuclear warhead being prepared adjacent to the nosecone of a Hwasong-14 ICBM.

“The H-bomb, the explosive power of which is adjustable from tens kiloton to hundreds kiloton, is a multi-functional thermonuclear nuke with great destructive power which can be detonated even at high altitudes for super-powerful EMP attack according to strategic goals,” the KCNA said.

The North’s presentation of the warhead is notable for coming after two ICBM tests and an intermediate range ballistic missile (IRBM) test over Japan last Tuesday, events which all contributed to a sharp increase in tensions between the U.S. and North Korea.

The report added that the warhead design has been upgraded to a “higher ultra-modern level” to what had been used for North Korea’s first claimed hydrogen bomb test, an event which took place on January 6, 2016, although experts disputed its technical characteristics at the time.

Kim Jong Un “felt the pride of indomitably bolstering up the nuclear forces,” as he was pictured with senior officials of the Department of Munitions Industry of the Central Committee of the Workers’ Party of Korea (WPK) and scientists of Nuclear Weapons Institute, the KCNA added.

Furthermore, the report emphasized that the warhead components and production techniques were all domestically produced and mastered, meaning that North Korea can “produce powerful nuclear weapons as many as it wants”.

An artists mockup of the inside of the missile was pictured hanging on a wall with translated text reading: “Hwasong-14 type nuclear warhead hydrogen-bomb”.

“Though we can’t verify the claim that North Korea (now) has a thermonuclear capability, we also cannot rule it out,” said Adam Mount, Senior Fellow, at the Center for American Progress.

“We know they have been preparing to develop and probably to test these warheads,” he continued. “It should come as no surprise if they do.”

North Korea hasn’t tested a nuclear device since September last year, meaning it is possible the DPRK could now be preparing for another test, something South Korean intelligence officials recently stated could happen at any time.

But that makes it also possible that Pyongyang could be considering an atmospheric test of a nuclear warhead by launching one of its ICBMs to a remote part of the Pacific ocean and detonating the warhead there.

Mount, however, said he didn’t expect the North would need to conduct such a test, which would provide easier access to radioisotopes to observers like the U.S. and cause unnecessary geopolitical risk.

“An atmospheric test would be extremely escalatory and could potentially cause significant loss of life, depending where it was carried out,” he said.

“We also know they’ve been further improving their underground testing facility, suggesting they plan to do future tests there.”

Another observer expressed doubt as to whether North Korea is as close to finalizing a working design for a thermonuclear warhead as Pyongyang says it is.

“There are controversies as to whether North Korea can (yet) load a nuclear warhead onto an ICBM or if (its warheads) can re-enter the atmosphere,” said Kim Dong-yeob, a former South Korean naval officer and researcher at the Institute for Far Eastern Studies.

“North Korea is trying to send signals to the U.S. that if they don’t initiate a negotiation, if they don’t bring the North to the negotiating table, they are going to finish their (ICBM) developments.”

He said it was important to consider the broader context, for North Korea wasn’t just firing missiles but also showcasing its evolving nuclear technologies and even chemical weapons factories, which Kim Jong Un visited last month.

Meanwhile, the two leaders of Japan and U.S. on Sunday conducted a telephone conversation for the third time in the past six days, seemingly prompted by news of the warhead, though there was no mention of it on a call readout document.

“(The) two leaders noted the need to strengthen the Republic of Korea’s defense capabilities to counter provocations and threats from North Korea, and reached an agreement in principle to revise the ‘missile guideline’ to the extent hoped by the South Korean side,” Cheong Wa Dae spokesman Park Soo-hyun said in a press release on Saturday.

The South Korean government said in late July it was discussing with the U.S. its need to expand its missile development guideline beyond the current limits of a 500-kilogram missile payload and 800-kilometer range.

North Korea has developed a hydrogen-bomb that can be loaded onto a new intercontinental ballistic missile (ICBM), state media outlet the Korea Central News Agency (KCNA) said on Sunday.

The KCNA published photos of Kim Jong Un inspecting what was described as a thermonuclear warhead being prepared adjacent to the nosecone of a Hwasong-14 ICBM.