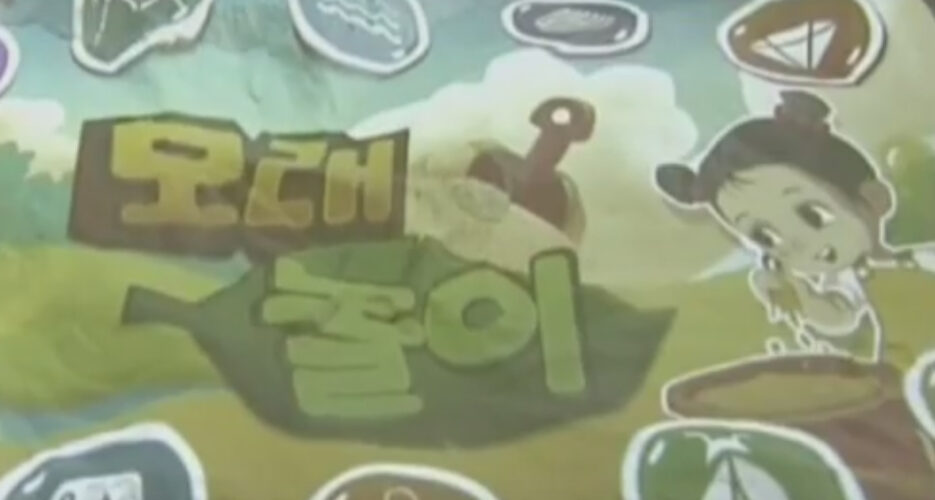 The program appears to be an AR sandbox, in which the user changes the topography of artificial sand in a box to manipulate a virtual environment.

Researchers at Kim Il Sung University have developed a “new intelligent playground equipment for children,” an anchor says in the video.

DPRK Today said the product consists of a projector, a depth sensor, and a sandbox.

“It is an entertainment equipment that enables a player to understand nature by showing a picture realistically followed by the player’s hand gesture,” the report adds.

The video shows the volcano erupting when a player scoops out a hole in the sand. Users can also dig up minerals.

“Children can efficiently acquire knowledge of natural geographical characteristics of our our country – which is surrounded by water on three sides – within a short time by digging the sand in the shape of the Korean map,” the anchor says.

“As you play the game of water flow, [the player] can intuitively see and understand the principle that water flows from a high to low place through the process of digging sand.”

The media said the research institute had collaborated with the researchers in the field of geology and energy science to “design and manufacture the play sand and the equipment.”

But they appear to have been inspired by a games manufacturer in the South.

The South Korean company Cellbig developed a very similar program, “Sandcraft,” in 2015, according to the company, which claims that it was the first to develop the software.

Jung Byong-gyun, a director at Cellbig, told NK News that the North appears to have produced the AR sandbox by “referring to [our] program.”

“Because there are certain resemblances in terms of graphic style, the motion of icons, font, and presentment,” Jung said, adding the North Korean-made product also has “a few similarities,” to similar products manufactured by other companies.

The website of the Cellbig indicates that Sandcraft also has a theme of “stereognostic perception based on virtual environment play study contents,” and also features “Volcanic Activity, Insect Collection, and The Flow of Water.”

Cellbig has reportedly exported their products to China, the U.S., and other countries.

Jung told NK News that the company sells around five to ten pieces of equipment per month, which can cost up to 13 million South Korean Won (KRW), or USD$11391.90.

The game, entitled “Soccer Fierce Battle,” appears to be similar to the U.S.-produced FIFA and the Japanese-made “Pro Evolution Soccer” series, but no details have been given about which platforms can be used to play.

The program appears to be an AR sandbox, in which the user changes the topography of artificial sand in a box to manipulate a virtual environment.