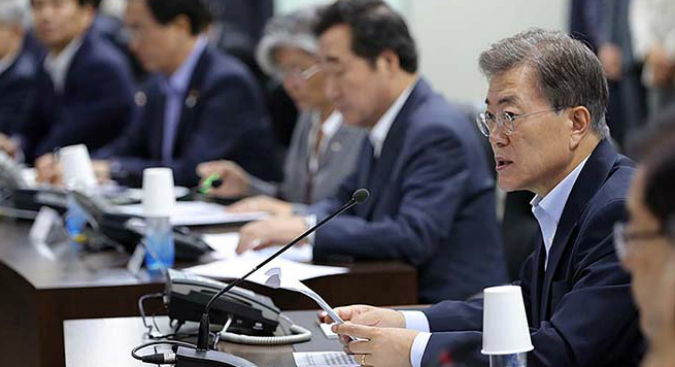 South Korea will increase its military spending to 2.9 percent of Gross Domestic Product (GDP) under his presidency, President Moon Jae-in said on Tuesday.

The move would see the largest increase in Seoul’s defense budget as a percentage of national GDP since the 1980s.

“The new government is seeking a dialogue with North Korea but it would be meaningless without the overwhelming national defense power,” Moon was quoted by Blue House spokesperson Park Soo-hyun as saying in a written statement.

The remarks were made during a luncheon at the presidential Blue House with military commanders including the new Minister of National Defense Song Young-moo, his predecessor Han Min-koo, and Chairman of the South Korean Joint Chiefs of Staff (JCS) Lee Sun-jin.

“We have the goal of raising the current defense budget – which is currently 2.4 percent of GDP – to 2.9 percent during the term,” Mood said, when asked about progress on the “urgent task” of strengthening national defense.

Seoul on Monday sent a proposal to North Korea for talks on easing military tensions and the reunion of separated families, as part of “follow-up measures” to the policies proposed by Moon in a speech in Berlin last month.

The South said it hoped that the talks will take place on July 21 and August 1, respectively, but a Ministry of National Defense (MND) spokesperson said on Tuesday at a morning briefing that there had been no response so far from the North Korean side.

“There are many pillars that maintain the country, the most important of which are the defense and the economy,” Moon said. “The economy is a matter of living a little better, but defense is a matter of existence and survival of the country.”

“Defense and security are most urgent now that there are continued provocations by North Korea. There must not be any gap in our defense in spite of a change of the government or in commanders.”

The Ministry of National Defense (MND) said on June 8 that it would request a defense budget of KRW43.7 trillion ($38.7 billion) for 2018, which is the highest figure, not adjusted for inflation, since the foundation of the country.

Should the National Assembly accept the budget, this would amount to an 8.4 percent increase compared to 2017.

In addition, the budget for the “force improvement program” will be increased by 11.6 percent to KRW13.6 trillion, in an attempt to speed up the development of the Korean-built three-axis system.

Moon Jae-in has pledged to return wartime operational control (OPCON) to Seoul during his administration, a move which would require a major expansion of South Korea’s military capabilities.

South Korea ranks tenth in the world for both total military spending and spending as a percentage of GDP, according to data from the Stockholm International Peace Research Institute (SIPRI) and the International Institute for Strategic Studies (IISS).

South Korea will increase its military spending to 2.9 percent of Gross Domestic Product (GDP) under his presidency, President Moon Jae-in said on Tuesday.The move would see the largest increase in Seoul's defense budget as a percentage of national GDP since the 1980s.“The new government is seeking a dialogue with North Korea but it would be meaningless without the overwhelming national