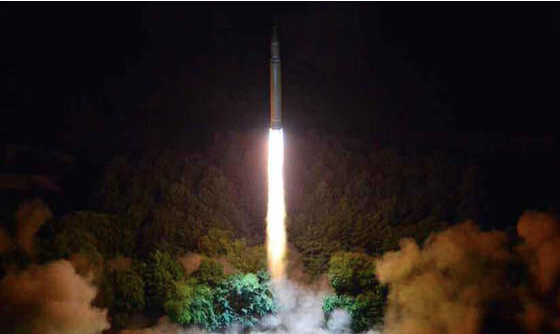 Leader Kim Jong Un ordered the test of what North Korea has called the Hwasong-14 missile, which flew for 998 km at a maximum altitude of 3724.9 km for 47 minutes and 12 seconds.

“The test-launch was aimed to finally confirm the overall technological specifications of the weapon system of Hwasong-14 capable of carrying large-sized heavy nuclear warhead, including its maximum range,” it added.

Kim Jong Un reportedly said that the success of the DPRK’s ICBM had been “reconfirmed.”

Yesterday’s launched, he said, “demonstrated the capability of making surprise launch of ICBM in any region and place any time, and clearly proved that the whole U.S. mainland is in the firing range of the DPRK missiles.”

“If the Yankees brandish the nuclear stick on this land again despite our repeated warnings, we will clearly teach them manners with the nuclear strategic force which we had shown them one by one,” Kim added.

This is North Korea’s second test of the Hwasong-14 and its 12th missile test this year.

KCTV aired footage of the launch on Saturday

In response to last night’s test, South Korea and the U.S. conducted a joint military drill early on Saturday morning.

The U.S. Army said in a statement that the test had involved the surface-to-surface Army Tactical Missile System (ATACMS) and South Korea’s Hyunmoo Missile II, and that it had “fired missiles into territorial waters of South Korea along the East Coast July 5.”

“The ATACMS can be rapidly deployed and engaged and provides deep-strike precision capability, enabling the ROK-US alliance to engage a full array of time-critical targets under all weather conditions,” the army said in a statement.

“Threatening the world, these weapons and tests further isolate North Korea, weaken its economy, and deprive its people,” Trump said. “The United States will take all necessary steps to ensure the security of the American homeland and protect our allies in the region.”

A missile launch from North Korea’s Mupyong-ni in Jagang Province was detected as having taken place at 11.41 pm KST on Friday.

The President called for more military exercises by the U.S. and South Korea in response to the test, as well as saying that discussions should be held with the U.S. on the deployment of additional units of the U.S.-made Terminal High Altitude Area Defense (THAAD) missile defense system.

The full deployment of THAAD is currently on hold pending an environmental assessment, and it is not clear whether Moon’s statement means the process will be sped up.

Leader Kim Jong Un ordered the test of what North Korea has called the Hwasong-14 missile, which flew for 998 km at a maximum altitude of 3724.9 km for 47 minutes and 12 seconds.