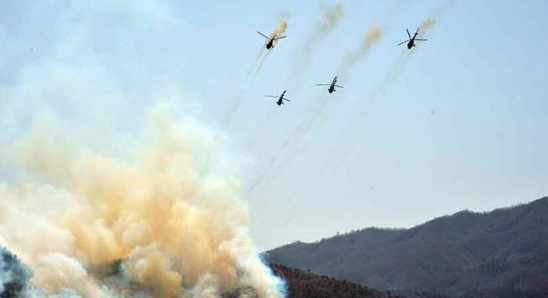 The video showed Kim watching “Dropping and Target-striking Contest of KPA Special Operation Forces” which was reported by state media on April 13, but Sunday’s footage showed previously unseen footage of the drill.

The state-run Korean Central News Agency (KCNA) said the military unit – tasked with conducting a surprise attack – struck, suppressed and eliminated targets in a simulation of an attack on enemy special operations forces and a missile base.

The video showed the special forces jumping from an aircraft and running towards a replica of South Korea’s Hyunmoo-3A missile mounted on a vehicle, which is then destroyed by what appeared to be a grenade.

The Hyunmoo-3 is a cruise missile with a range of around 500km, developed by the South Korean military in the early 2000s.

Last month South Korean President Moon Jae-in observed a live-fire test launch of the indigenously produced ballistic missile as part of what Seoul described as an exercise to “gravely warn” Pyongyang not to carry out further missile and nuclear tests.

“When the U.S. imperialists is raging on the war drills to attack the DPRK by drawing the measures for nuclear strikes, the hearts of combatants of the special forces are burning with the determination of exterminating the enemy,” the female anchor says in the North Korean documentary, with the soldiers reportedly “trampling on the enemy’s extremely dangerous attempt to launch a preemptive strike through the Korea-style special operation and preemptive strike.”

The soldiers are also seen shooting at wooden replicas of what appears to be soldiers clad in the South Korean military uniform, as well as destroying replica armor vehicles using mortars.

“The contest clear showed that our army’s retaliation is the merciless mopping-up operation and intensive surprise attack like a lightning which wipe out the daylight robbery U.S. imperialist and its subordinate without a trace,” the anchor adds.

The documentary also shows Kim Jong Un gifting a pair of binoculars and an automatic rifle to the soldiers, with a slogan behind him reading: “Dissipate the U.S. imperialist invader!”

Some highlights from the 1hr, 5-minute documentary: attack on Hyunmoo 3A seen at 02:47

South Korea’s military carried out a similar exercise last year, Kim Min-seok, a senior researcher at the Korea Defense and Security Forum (KODEF), told NK News, with the Republic of Korea Naval (ROKN) UDT/SEAL having destroyed a crude wooden replica of what appeared to be a North Korean missile.

Kim also said that the Hyunmoo would not be able to be destroyed by grenades.

“The North Korean military is showing their determination but doesn’t mean that they would [blow the missile] in actual fighting,” Kim told NK News.