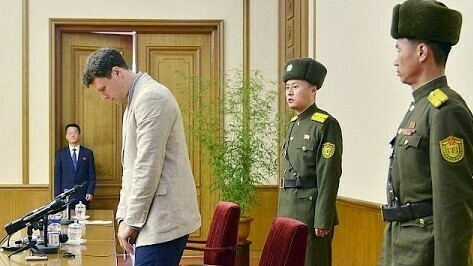 The report, which came out almost two days after the U.S. State Department announced it had secured the 22-year-old’s release “at the direction of the President,” is North Korea’s first public statement on the case.

“U.S. citizen Otto Frederick Warmbier, who had been in hard labor, was sent back home on June 13, 2017 on humanitarian grounds according to the adjudication made on the same day by the Central Court of the DPRK,” the KCNA report, which consists of only one line, reads.

Warmbier’s family says Otto contracted botulism, a rare and potentially life-threatening bacterial illness, while in North Korea, and fell into a coma after his last public appearance in 2016.

Fred Warmbier on Wednesday told Fox News in an interview that his son was “not in great shape right now,” and that he is undergoing treatment at the University of Cincinnati Medical Center.

“Otto has been terrorized and brutalized for 18 months by a pariah regime in North Korea,” Fred Warmbier said.

Warmbier, a student of commerce and economics at the University of Virginia originally from Ohio, had served 17 months of a 15-year hard labor sentence from North Korean authorities for “crimes against the state.”

He was arrested by authorities early last year while on a visit to North Korea as a tourist, after he walked into a staff-only area of the Yanggakdo International Hotel in Pyongyang and took down a political slogan from a wall.

His release on Tuesday came the same day as a surprise visit to North Korea by ex-NBA star Dennis Rodman. But while some speculated the two might be connected, State Department spokesperson Heather Nauert told press on Tuesday that Rodman “did not have anything to do” with the release.

Instead, it has emerged, Warmbier’s return home was the result of talks between U.S. and North Korean officials.

Joseph Y. Yun, the United States Special Representative for North Korea Policy, met with DPRK diplomats in New York earlier in the month, according to the New York Times, during which he became aware of Warmbier’s poor health and demanded he be returned home.

Yun and a medical team then arrived in Pyongyang on Monday to secure his release.

The move leaves three U.S. citizens in detention in North Korea: Tony Kim and Kim Hak-song, who are affiliated with the Pyongyang University of Science and Technology (PUST) and were arrested in late April and early May, respectively, and Kim Dong-chul, who was sentenced in October 2015 to 10 years’ hard labor for espionage.

North Korea's state-run news outlet the Korean Central News Agency (KCNA) said on Thursday that U.S. citizen Otto Warmbier was released for "humanitarian" reasons.The report, which came out almost two days after the U.S. State Department announced it had secured the 22-year-old's release “at the direction of the President," is North Korea's first public statement on the case."U.S.