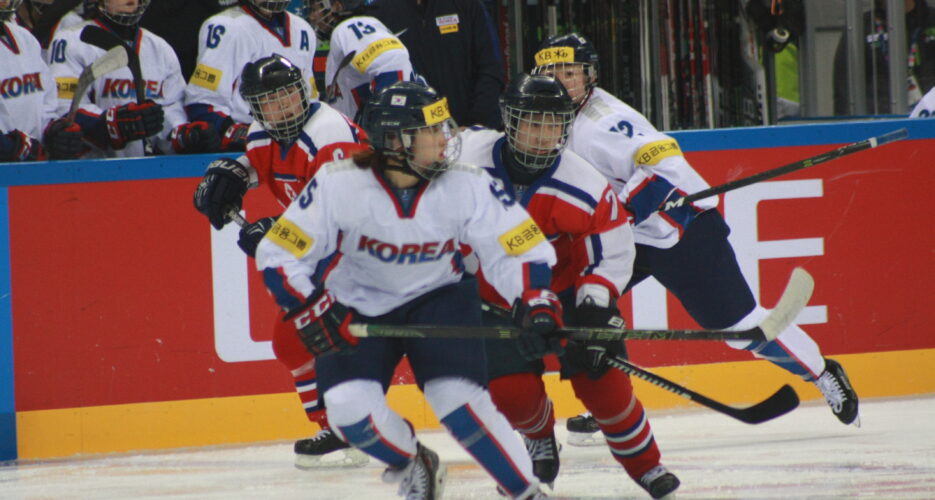 The South Korean Women’s Ice Hockey team emerged victorious against their North Korean counterparts on Thursday night, winning 3-0 in a match at the Gangneung Hockey Center in Gangneung, South Korea.

The game was part of the 2017 IIHF Ice Hockey Women’s World Championship, and was the North Korean team’s fourth game of the tournament. The tournament also serves as qualifiers for 2018 Pyeongchang Winter Olympics.

Notably, the match came just a day after North Korea was reported to have launched a missile into the Sea of Japan – one of several in recent months.

Players from the two Koreas stood inches apart from each other in the moments before the game started and during the match. The South Korean team wore jerseys emblazoned with “Korea”, while the DPRK team wore the star of their country’s flag.

But the atmosphere was more one of unity than confrontation. Supporters largely waved the blue-on-white Korean Peninsula Unification flag known as the Hanbandogi and sang pro-unification anthems.

The North Korean team had, before the match, only won one of three matches prior – against Great Britain on Wednesday – which they won by 3-2.

They also lost to Australia on Sunday (2-1) and the Netherlands on Monday (4-2).

The South Korean team, on the other hand, had won every game it played: against Slovenia on Sunday (5 – 1), against Great Britain on Monday (3 – 1), and against Australia on Wednesday (8 – 1).

Both teams have one more match ahead of them: North Korea plays Slovenia on Saturday, and South Korea will play the Netherlands later the same day.

The match was the first between the two women’s ice hockey teams on the peninsula since its division, and the first inter-Korean match in the South in three years.

The lead up to the trip has been mired in bureaucratic uncertainty: as of early February, the two countries had still not discussed the logistics of sending the North Korean team to the South.

In mid-March, the North Koreans submitted their entry list for the matches to the PyeongChang Organizing Committee, though the South Korean Ministry of Unification (MOU) said it had not received any details from their DPRK counterparts.

It would take a subsequent 11 days for them to officially hear from their colleagues in the North, and the DPRK team arrived in the South on Saturday, just three days after Seoul announced they would be allowed to visit.

The South Korean Women's Ice Hockey team emerged victorious against their North Korean counterparts on Thursday night, winning 3-0 in a match at the Gangneung Hockey Center in Gangneung, South Korea.