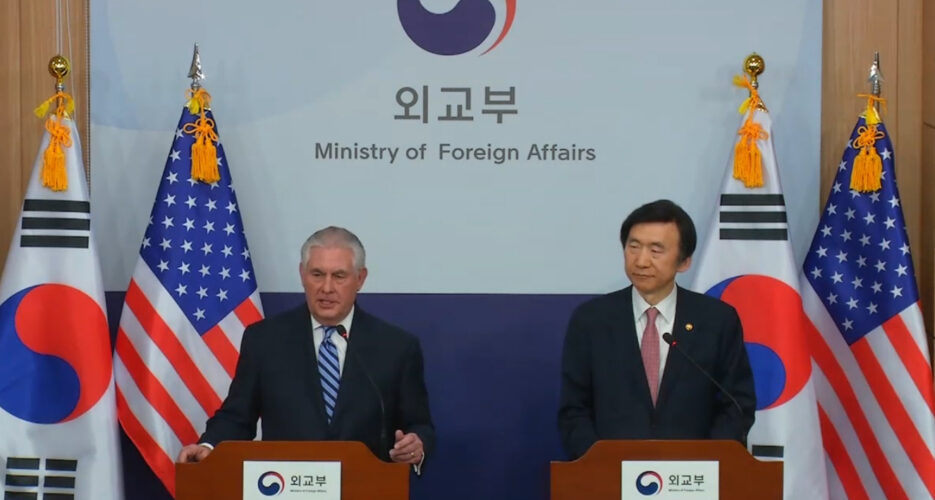 U.S. Secretary of State Rex Tillerson at a press conference on Friday in Seoul refused to rule out military action against North Korea, saying that “all options are on the table”.

“We do not want for things to get to a military conflict, but if North Korea takes actions that threaten our forces, and our allies’ forces, then that will be met,” he said.

Speaking alongside South Korean Foreign Minister Yun Byung-se, Tillerson said that past efforts focused on waiting for North Korea to denuclearize “have failed” and that the U.S. was exploring a “range of options”.

The Obama-era policy of “strategic patience” towards North Korea’s nuclear and missile programs is over, he said, adding that the U.S. would be pursuing a “number of steps”, but stopped short of detailing specifics beyond implementation of sanctions and encouraging regional players to do the same.

In part of what is the Secretary of State’s first tour of East Asia, Tillerson also ruled out any kind of talks with the leadership in Pyongyang, saying that talks would only take place once North Korea began to take steps toward denuclearization.

“It is important that the leadership of North Korea realize that the current pathway will not lead to their objective of security and economic development,” he said. “That can only be pursued by denuclearization, only then will we be engaging them in talks.”

A “new approach” is needed, Yun argued, with the North’s nuclear and missile threats representing a “very grave and imminent” threat.

Yun said the core topic of the bilateral meeting is to develop a “common approach” to North Korea’s nuclear program.

“The governments of the two countries will respond clearly and staunchly on the bilateral level at the international stage to undue pressures on the self-defensive measures protecting the national security and the lives of people,” he said, referring to the recent deployment of the Terminal High-Altitude Area Defense (THAAD) missile defense system in South Korea.

Tillerson’s comments echo those made by United States Ambassador to the United Nations Nikki Haley in a CNN interview yesterday, in which she said that the U.S. would not be pursuing Six-Party Talks in the near future.

Daniel Pinkston, a lecturer at Troy University, argued that while the State Department is in a state of flux as the Trump administration struggles to fill vacancies left by the outgoing Obama administration, Tillerson will struggle to radically change the status quo in the region.

“Even with the best-seasoned diplomat and a fully staffed State Dept with the best American experts would be extremely challenged with NE Asian diplomacy and security problems. This administration seems to think they can handle it as a part-time hobby,” he said. “Despite the dissatisfaction by all sides, they do not have the means or the power to drastically change the status quo.”

“Eventually, if the Trump administration studies the situation, I’m pretty confident they will realize that the default policy of deterrence and containment is optimal under the conditions.”

The administration, Pinkston said, seems “more focused on slogans and signalling to everyone they are not Obama,” than making concrete policy.

Rex Tillerson spoke in Tokyo yesterday, stressing the need for a “different approach” after “20 years of failed approach” to North Korea’s nuclear and ballistic missile programs.

“That includes a period where the United States has provided $1.35 billion in assistance to North Korea as an encouragement to take a different pathway,” he said during a press conference in Japan’s capital.

Tillerson will arrive in Beijing tomorrow, and suggested on Thursday that he would use the visit to pressure Chinese leaders to do more to curb North Korea’s ongoing nuclear and ballistic missile program.

His visit comes amid growing tensions between the U.S., South Korea and China over the deployment of THAAD. China has responded to the deployment of the system with a ban on Chinese tourism to the ROK, and the South Korean conglomerate Lotte, which last month agreed to provide the land for the system, has seen its China-based outlets boycotted and vandalised.

When asked at Friday’s conference in Seoul whether he would raise the issue with Chinese leader Xi Jinping during their meeting tomorrow, Tillerson described China’s actions as “unnecessary and troubling” and said the two would discuss “the North Korea threat”.

“China must deal with the threat that makes THAAD necessary,” he said, stressing that the system is “purely defensive”.

U.S. Secretary of State Rex Tillerson at a press conference on Friday in Seoul refused to rule out military action against North Korea, saying that "all options are on the table"."We do not want for things to get to a military conflict, but if North Korea takes actions that threaten our forces, and our allies' forces, then that will be met," he said.Speaking alongside South Korean Foreign