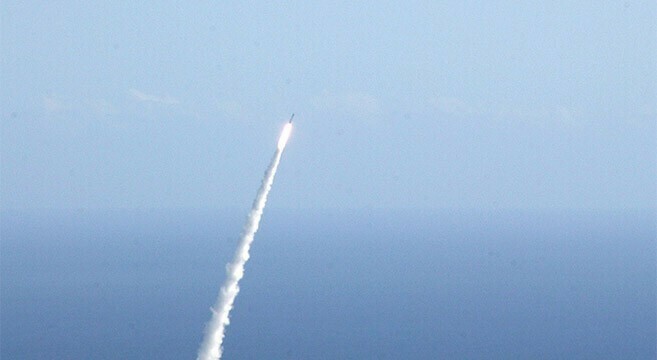 The missile, which was launched at Panghyon from North Phyongan Province at 0755 KST and traveled around 500km after a rapid vertical ascent of 550km, appears likely to have been a Musudan-type missile.

“We presume that there is a high possibility that the missile launched near Panghyon today is a ‘modified Musudan-level missile’,” the JCS said in a written statement after announcing that the North had probably launched a Rodong-type missile.

Earlier in the day the JCS had said it was considering the possibility the launch involved a “new kind of the missile,” but underscored it wasn’t an intercontinental ballistic missile (ICBM) due to its “altitude and flight distance”. The U.S. Strategic Command described it as a “medium range or intermediate range ballistic missile” earlier on Sunday.

Trump and Abe conducted a joint press statement from Florida in response, in which the U.S. pledged full support to Tokyo in face of the test.

“I just want everybody to understand and fully know that the United States of America stands behind Japan, its great ally, 100 percent,” Trump said from Florida in a short statement, without mentioning South Korea, a point that will likely have concerned leaders in Seoul.

President Trump responded by saying on Twitter that a North Korean ICBM capability “won’t happen,” meaning Sunday’s test could be seen as posing a direct challenge to the White House.

“Our assessment is that the North is attempting to attract attention by showing off its nuclear and missile capabilities and to make a show of force to counter against the new U.S. administration’s hardline stance toward North Korea,” the JCS said about the launch early on Sunday.

After launch, South Korea’s Yonhap News Agency said the JCS was working to assess whether the projectile might be a Musudan-type missile, which has an estimated range of between 2,500-4,000 kilometers and an estimated payload capacity of 1,000-1,250 kilograms.

North Korea test-fired Musudan missiles eight times from April 15 until October 20, but succeeded only once with a test launch on June 22.

“The current estimated flight range of around 500 kilometers makes a Scud or Rodong variant probable, but it is also possible the North launched a Hwasong-10 (Musudan) on a lofted trajectory resulting in a reduced horizontal distance,” said NK News Director of Intelligence John Grisafi.

“They have done this previously with the Hwasong-10 in order to test it while preventing it from falling outside their own territorial waters and potentially being salvaged by another state for analysis,” he said.

Another Seoul-based North Korea expert said the timing of the launch is ideal for sending a message to the Trump Administration and weakening Seoul’s position.

“While the launch had the risk of backfiring and agitating President Trump, it’s not like the U.S.’ military can double or triple its size, or to hire Tony Stark,” Cha Du-hyeogn, a former intelligence secretary to South Korean President Lee Myung-bak told NK News.

“So, even if Pyongyang does something foolish, multiple barriers are holding the U.S. back from conducting a preemptive strike or take military action,” he said.

“Also, considering the mess that the current South Korean government is in now makes this an ideal time to drive a wedge between the ROK-U.S. cooperation.”

President Trump’s Twitter account indicated he would have been dining with Japanese Prime Minister Abe in Florida at the time of the launch.

“The whole government is making its utmost efforts to punish [the North] corresponding to [the missile launch] in tandem with the international community,” South Korea’s Acting President Hwang Kyo-ahn said about the launch.

As of Sunday, North Korean state media was yet to comment about the launch. Typically, it confirms only successful launches, usually one day after they take place.

On the occasion of Donald Trump’s inauguration, the White House announced on January 20 that it would make the United States military “strong again” through a new budget that will improve missile defense capabilities against North Korea.

The missile, which was launched at Panghyon from North Phyongan Province at 0755 KST and traveled around 500km after a rapid vertical ascent of 550km, appears likely to have been a Musudan-type missile.