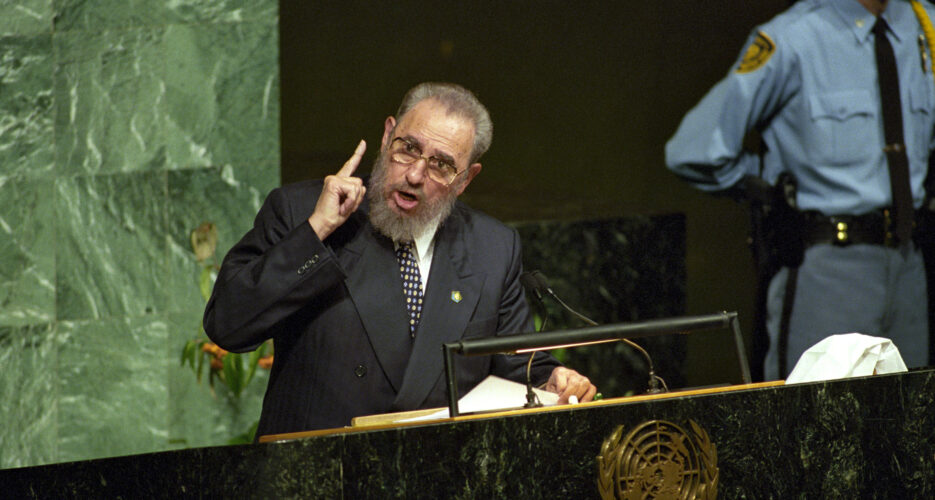 The delegation is led by Choe Ryong Hae, a member of the Presidium of the Political Bureau of the Central Committee of the Workers’ Party of Korea (WPK), and left Pyongyang for Havana on Monday.

Rodong Sinmun, North Korea’s most widely read newspaper and an organ of the ruling party, reported on Monday that a joint decision concerning Castro’s death was issued on Sunday by the Central Committee of the ruling Workers’ Party and the rubber-stamp Presidium of Supreme People’s Assembly (SPA).

“The death of Fidel Castro Ruz is a tremendous loss for people of both countries who are struggling for the Cuban revolution and great communal achievement,” Rodong Sinmun reported on Monday.

Rodong Sinmun announced that a mourning period of three days would take place in North Korea, describing Castro as a “prominent leader” and a “famous political activist.”

“[The Central Committee of the WPK and the Presidium of SPA] proclaimed [a] three-day mourning period from November 28 to 30, 2016,” Rodong Sinmun said. “[The DPRK] hoists a flag at half-mast at the important government office buildings and designated places.”

Kim Jong Un also on Sunday sent a message to offer his condolences about the “unexpected” death of Castro to the Cuban government and people and his bereaved family.

“Comrade Fidel Castro Ruz put every effort into strengthening and improving amicable and cooperative relations between the two countries and governments and peoples for a long time, more than half a century,” Rodong Sinmun quoted Kim Jong Un as saying.

“I express my confidence that revolutionary Cuban people can get over the grief of loss,” Kim said. “And [they] can construct of people’s prosperous, rich and powerful ideal society and achieve the victory of socialism following the wish of comrade Fidel Castro and under the wise leadership of Raúl Castro Ruz.”

Kim met Salvador Antonio Valdes Mesa, vice president of the Council of State of Cuba, and other Cuban officials visiting the North as special envoys of Raúl Castro on June 30, 2016.

On September 7 in 2015, Kim also held bilateral talks with Diaz-Canel Bermudez, first vice president of the Council of State of Cuba, on the occasion of the 55th anniversary of the establishment of diplomatic relations between the two countries.

Cuba cut off official diplomatic relations with South Korea in January 1959 after the Cuban revolution, and South Korean Foreign Minister Yun Byung-se held one-on-one talks with his Cuban counterpart, Bruno Rodriguez, for the first time in the history on June 5, 2016.

The MOFA, however, were unable to immediately give a comment on the issue at the request of NK News.

The delegation is led by Choe Ryong Hae, a member of the Presidium of the Political Bureau of the Central Committee of the Workers' Party of Korea (WPK), and left Pyongyang for Havana on Monday.