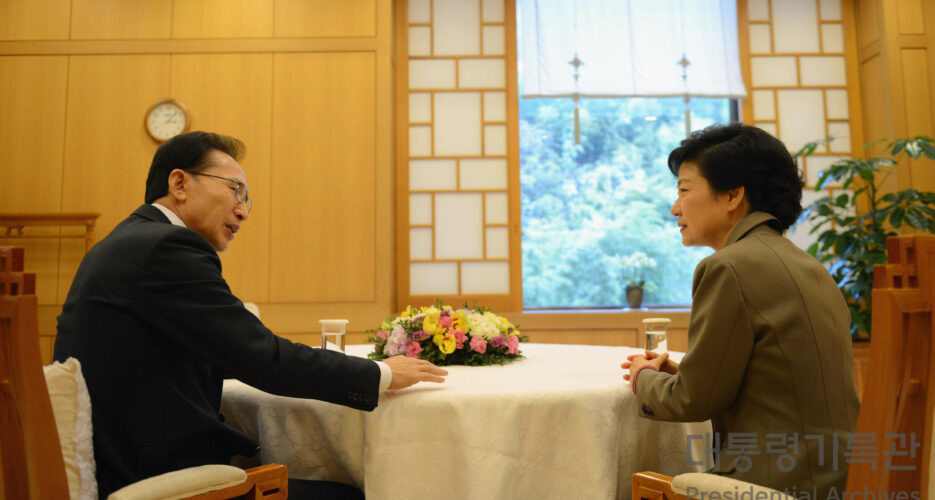 The meetings were apparently held after the South announced that it would completely shut off communication with the North in the aftermath of the sinking of ROK Navy Corvette Cheonan, an incident the South still blames the North for.

The document, obtained by news network JTBC, constituted the official minutes of a meeting between Park Geun-hye, who was president-elect at the time, and Lee Myung-bak, who was the outgoing president.

During the meeting, held on December 28, 2012, Park asked whether there had been any interactions with the North, and Lee replied that military meetings had been held three times that month.

However, that part of the conversation was never revealed to the public at that time, possibly due to the sensitivity of the issue.

What was discussed during the secret meetings was not reported. Yonhap News Agency on Wednesday claimed, quoting an anonymous military source, that South Korean officials had demanded an apology for the sinking of Cheonan Corvette.

“The North made its demands, and we demanded various issues including the apology for the sinking of Cheonan,” said the anonymous source.

During a phone call with NK News, a press secretary at the South Korean Defense Ministry would not confirm or deny the meeting or Yonhap’s claims, saying the ministry was not at liberty to share any further details.

The minutes were leaked amid an ongoing domestic scandal known as the “Choi Sun-sil Gate” in local media.

Choi Sun-sil, an unauthorized individual and old friend of President Park, has been accused of getting involved in South Korean policy-making processes – including unification policy – and manipulating government human resources affairs in her favor.

The minutes were part of 44 government documents saved in Choi’s computer. President Park on Tuesday afternoon apologized for the Choi’s involvement in South Korean politics, stressing that her influence was only partial and temporarily.

South Korea and North Korea held secret military meetings three times in December 2012, with the details of the meetings still unclear, multiple South Korean media outlets reported on Tuesday evening.The meetings were apparently held after the South announced that it would completely shut off communication with the North in the aftermath of the sinking of ROK Navy Corvette Cheonan, an