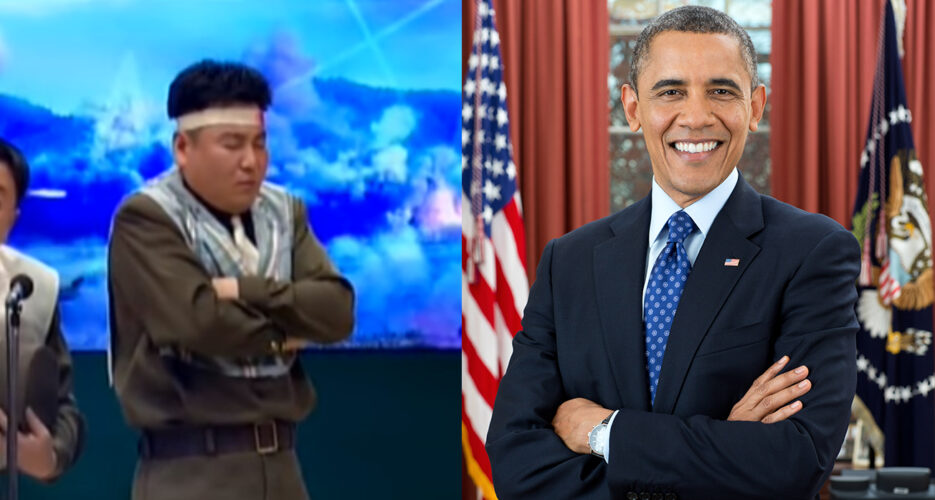 Satirical comedy shows are airing on North Korea’s national television channel, one of which features a satire on the U.S. President Barack Obama and his presidential secretary.

The show, which aired on state-run Korea Central Television (KCTV) and was uploaded on the Youtube channel of Uriminzokkiri, also portrays the lives of South Koreans, who are described as being “purged” and “oppressed” by their government.

“Are you all right Mr. President?,” the North Korean actor playing the presidential secretary says around 10 minutes into the show, looking at the “U.S. President” whose head is covered with a blood-soaked bandage.

“I smacked my head on the bathroom floor and broke four tiles on it,” the “President” responds, “as I was so shocked from the North’s hydrogen bomb detonation!”

“So Mr. President, you were testing the hardness of your skull while the North was testing its hydrogen bomb? ” the secretary says in laughter.

The North Korean comedy show runs for around 80 minutes, and its title roughly translates to “The stage of optimism that Songun presented – Volume 11,”. According to a South Korean government database, it was televised on the 1st of September.

The database shows that volume nine of the show was aired in May 2012 and volume ten was televised just this August, leaving well over four years between the shows.

None of the newly aired shows explained why the series was stopped for such a long time.

But according to one of the actors’ quotes from Volume ten, it has been around ten years since the first volume aired on North Korean TV.

“Mr. President, are you just going to let North Korea – who stabbed in our ribs – to do whatever they want to? ” the presidential secretary says.

“I will zip the mouth,” says Obama.

“Zip who? North Korea?” the secretary asks, to which the president responds that he wants to “zip his own.”

SEOUL: WHERE PEOPLE ARE “PURGED”

The latter part of Volume 11 lampoons South Korean society, which, according to the description, is “corrupted to the root” and where the government “oppresses” its people.

“Scared by the South Koreans’ series of demonstrations against the deployment of the Terminal High-Altitude Area Defense (THAAD) system, Park Geun-hye is rampaging like a mad dog and purging those who are anti-American cells. Let’s see how they are doing!” the host says.

“Granny Park in the Blue House is enraged as the anti-American sentiment is rising in the South,” says the senior South Korean police officer, who is ordered to arrest anyone who “squints, frowns, punches” at anything to do with the U.S.

Later, three South Koreans are detained by three police officers, who frame them as anti-American cells, with each of them charged for “frowning on the U.S. beef,” “spat in the bucket with a U.S. flag drew on” and “spreading anti-American quizzes” among the South Korean population.

While North Korean media is known for its over-the-top condemnations of Washington and Seoul, as far as NK News can tell this is the first time the North has explicitly used U.S. and South Korea-related satire in its comedy.

Satirical comedy shows are airing on North Korea's national television channel, one of which features a satire on the U.S. President Barack Obama and his presidential secretary.

The show, which aired on state-run Korea Central Television (KCTV) and was uploaded on the Youtube channel of Uriminzokkiri, also portrays the lives of South Koreans, who are described as being “purged” and “oppressed” by their government.