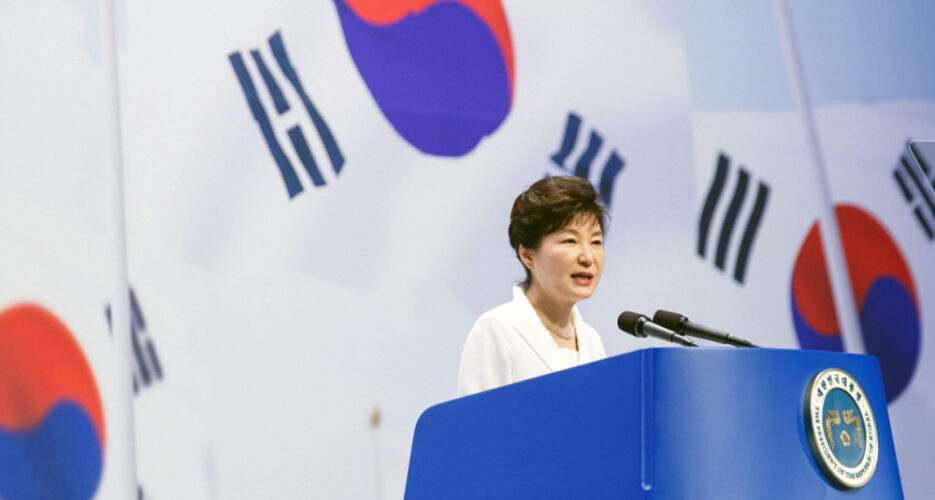 Park Geun-hye’s Independence Day speech on Monday slammed the North Korean government’s increasing threats towards the South, as well justified a controversial decision to deploy a THAAD anti-missile battery on the peninsula.

Some parts of the statement, which once again called for Pyongyang to halt its nuclear program, were notably aimed at the full width of North Korean society.

“To the North Korean elites and all of the residents,” President Park said, “unification will bring you new opportunities, in which all of you will be treated equally without facing any discrimination and disadvantage…”

“Please take part in opening the new era of unification on the Korean Peninsula, where no one has to fear the horrors of nuclear weapons and war,” she said.

A South Korean expert said that due to the comprehensive targeting of North Korean society in her remarks, this year’s Independence Day speech was the most notable of the four Park had issued since becoming president.

“Her message can be summed up as ‘It’s better to live in a unified Korea than fearing under Kim’s reign of terror,” said Cha. “Park is telling them to stage a coup against Kim Jong Un.”

Park’s Independence Day speeches in 2013, 2014 and 2015 all started with “My fellow South Koreans and seven million overseas Koreans,” however, it appears this year is the first time Park mentioned the North in her introduction.

“My fellow South Koreans, seven million overseas Koreans and North Korean brethren, today is our 71st Independence Day…,” said Park at the kick-off of the speech.

“The real independence (of Korea) would be building a unified Republic of Korea where all of our 80 million Minjok (people) can enjoy freedom and the gift of human rights,” Park continued. “I believe this is the historical task that we need to achieve.”

Even during last year’s speech, which took place only a few days after the August mine attack that severely injured two South Korean soldiers, Park used the words “communication” and “cooperation” a total of 14 times.

But this year’s speech did not include a single usage of such language, instead peppered with multiple usages of words like “threat,” “provocation,” “nuclear” and “fear of war.”

“(Park) is clearly stating that the South will not even try to engage in conversation with the North,” Cha said of the difference in tone this year.

Park also strongly defended the government’s recent decision to deploy a U.S. made Terminal High-Altitude Area Defense (THAAD) battery in the South, emphasizing the need for the system to protect South Korean lives against the North.

On the same day, which is referred to as “Liberation Day” by North Koreans, the DPRK state-run newspaper Rodong Sinmun reported on Russian President Vladimir Putin’s sending of a congratulatory message to Kim Jong Un.

“Celebrating the Liberation Day, we are reverently recollecting the sacrifices that the Red Army and patriots of Chosun made for the DPRK’s independence,” said Putin in his letter to Kim Jong Un, as reported by Rodong.

Other North Korean media coverage of the Liberation Day event was mainly characterized on Monday by an intensification of calls for reunification of the peninsula.

Park Geun-hye's Independence Day speech on Monday slammed the North Korean government's increasing threats towards the South, as well justified a controversial decision to deploy a THAAD anti-missile battery on the peninsula.Some parts of the statement, which once again called for Pyongyang to halt its nuclear program, were notably aimed at the full width of North Korean society.“To