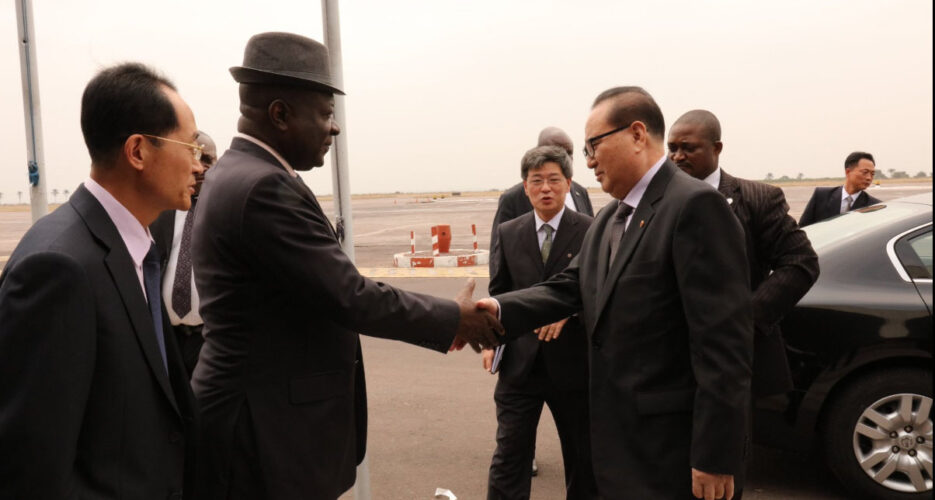 Pyongyang’s top diplomat, Ri Su Yong, completed a two-week-journey to mostly southern African countries on Monday, the Korea Central News Agency (KCNA) said, though the purpose of the meetings there appear to be exaggerated.

The trip, which saw Ri’s foreign ministry delegation take in visits to the Democratic Republic of the Congo, Namibia, Angola and South Africa, sought to promote the North’s relations through bilateral talks with different officials, KCNA said.

But analysis of reports from regional African media outlets suggest that North Korean state media accounts of the various visits were exaggerated.

The way North Korean media described a trip to Namibia, for example – a country that recently implemented United Nations sanctions against North Korea and cut ties with two high-profile entities – was at odds with how local officials characterized it.

“The North Korean delegation was invited by the Angolan ruling party … They appealed to pass here, and then from here they will go to meet South Africa’s ANC (African National Congress),” the General Secretary of Namibia’s ruling party said in remarks carried by local newspaper the Windhoek Observer.

Netumbo Nandi-Ndaitwah, the Namibian Deputy Prime Minister and Minister of International Relations and Corporation, also said Ri visit was “just a friendly visit and has nothing to do with the activities of government,” according to the Windhoek Observer.

“We will positively learn from the experience of the WPK which achieved the invincible single-minded unity that is stronger than ‘nuclear weapon’,” KCNA quoted Duarte as saying during the meeting with Ri. WPK is the acronym for the Worker’s Party of Korea.

Duarte’s office was not immediately available to confirm the remarks, which would have been notable given South Africa’s democratic and anti-nuclear weapons nature.

“The powerful WPK is a model in the world as it is frustrating the imperialists’ vicious moves for isolating and stifling the DPRK and carrying out its cause,” KCNA quoted Mova Sakanyi as saying, even though he would not elaborate on anything about the meeting to local French-language outlet politico.

One South Korean expert said in particular, the North’s claim about Duarte’s remarks was “totally fabricated” by state media.

“The identity of South Africa, which is very different from other African countries since it is a democratic country as well as has the previous example of giving up nuclear weapons,” Kim said.

“It can be understood as a propaganda attempt to emphasize the legitimacy of Kim Jong Un’s leadership and maintaining that African people would follow,” Kim added.

Another North Korean observer said the African countries may intentionally hide their meetings with the North.

“They (African countries) carry out the strategy to minimize openness. They will have burdens in many ways if they show their cooperation with the North,” said Lim Eul-chul, a North Korean expert at the Institute for Far Eastern Studies (IFES) at Kyungnam University.

This is due to the presence of “strong (sanction) regimes in the international society”, Lim added, also saying that African countries can’t help taking a vague position on their bilateral relations with the North.

“They accepted (the visit of) diplomat Ri Su Yong on the premise of a closed-door meeting because they can’t  interrupt contact entirely with the North due to their traditional and amicable relations,” Lim said.

Ri delivered a congratulatory speech at the Seventh Congress of the Popular Liberation Movement of Angola (PLMA), according to KCNA.

However, neither the official website of the PLMA nor local media, such as Agencia Angola Press (ANGOP), posted Ri’s remarks like they had previously with delegations of other countries such as Brazil, China and Cuba.

Pyongyang's top diplomat, Ri Su Yong, completed a two-week-journey to mostly southern African countries on Monday, the Korea Central News Agency (KCNA) said, though the purpose of the meetings there appear to be exaggerated.

The trip, which saw Ri's foreign ministry delegation take in visits to the Democratic Republic of the Congo, Namibia, Angola and South Africa, sought to promote the North's relations through bilateral talks with different officials, KCNA said.