Kim Jong Un says ‘dialogue’ key for inter-Korean relations
No negotiation with Pyongyang until it shows sincerity in denuclearization : Seoul
JH Ahn May 9, 2016 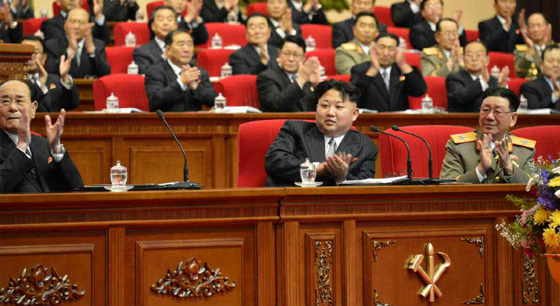 On the following day, the South Korean government said there will be no negotiation without “sincere” denuclearization efforts from Pyongyang.

“Both the North and the South should respect each other and open a new page of improvement in inter-Korean relations … as partners in unification,” Kim Jong Un said, in comments carried by the state run news outlet.

“Both Koreas should alleviate the current military tensions and resolve all matters through communication and negotiation … we admit the need to first hold talks between the North and the South’s militaries for the peace and unification of the Korean Peninsula.”

Kim added that if the South Korean government is genuinely interested in mending inter-Korean relations, they should approach the negotiating table without “impure intentions.”

In response to Kim’s address, South Korea’s Ministry of National Defense (MND) said they did not feel any “sincerity” in Pyongyang’s suggestion and added that there will be no further negotiations as long as the North is armed with nuclear weapons.

“Seoul is keeping the doors to dialogue open; however, for future discussions, we are firm that North Korea must first prove a sincere will towards denuclearization … and stop its provocations,” the South Korean Defense spokesperson said on Monday.

However despite the remarks, only a small part of Kim’s address discussed relations with South Korea.

“The part about the need for talks with the South was only minimal compared to the whole address, which was 70 pages long in total,” Kim Dong-yup, researcher at the Institute for Far Eastern Studies told NK News.

“Kim Jong Un’s recent address was like the massive cogwheel that dealt with North Korea’s overall challenges, and it included Pyongyang’s relations with Washington, inter-Korean relations, nuclear weapons and the list goes on … relations with South Korea mentioned in the address were only one part from one small cog.”

North Korean leader Kim Jong Un emphasized “communication and negotiation” as the key factors to resolve future inter-Korean relations, according to the Sunday edition of Rodong Sinmun.On the following day, the South Korean government said there will be no negotiation without “sincere” denuclearization efforts from Pyongyang.“Both the North and the South should respect each