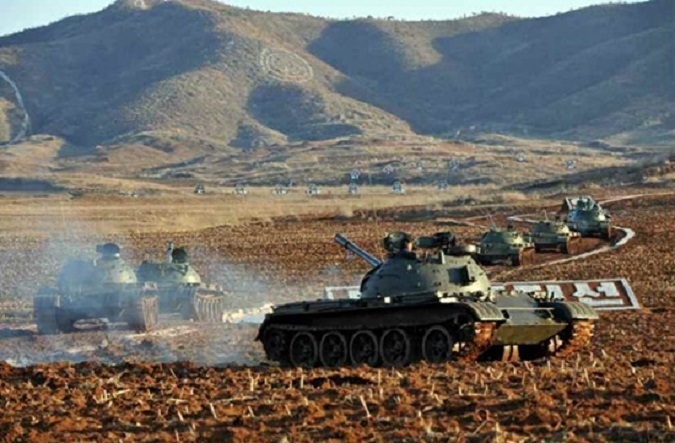 The intent behind the training is to, if necessary, attack the U.S. and South Korea, the state-run Rodong Sinmun reported on Friday.

“If the American imperialists and their followers make a single move against our homeland, the KPA will fight against them with ruthless retaliation that the world has not heard of,” it read.

“The training proved that as soon as the order is given, all of our forces in the skies, on land and in the ocean will attack the despicable Americans and their followers like Mount Paekdu’s thunder and storms.”

Kim said that the tanks shown in the training are vulnerable to South Korean attacks, leaving very little chance for North Korean forces to survive against South Korea’s mechanized forces.

Nonetheless, Kim believes that the Pokpung-ho, the tank shown in the red circle of the photo is formidable adversary.

“This Pokpung-ho Tanks have gone through many phase of modifications to upgrade its defense. Such a model will be able to fight evenly against South Korea’s old tanks such as M4845, however its firepower will still not match that of South Korea’s main tanks such as the K-1 or K1a1.”

Despite the outdated tanks, the rules introduced in this first North Korean tank competition look very similar to the the Tank Biathlon, the Russian tanks competition, Kim said.

“Unlike in the ordinary tank training, this North Korean training was held as a tournament following rules that are very similar to Tank Biathlon’s,” he said.

The tank biathlon is a mechanized military sport invented by the Russian Military in 2013, with events such as overcoming rough terrain while providing accurate and rapid fire while en route, Kim said.

While the North Korean article did not mention where they have got the idea of the training from, China Daily’s article wrote that North Koreans took part as observers in the Tank Biathlon in 2015.

The intent behind the training is to, if necessary, attack the U.S. and South Korea, the state-run Rodong Sinmun reported on Friday.