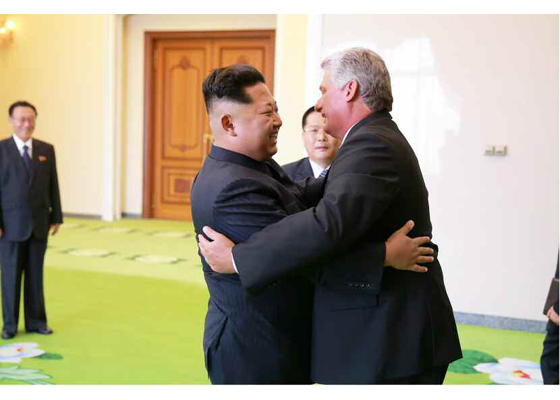 Note: This article originally stated that this was Kim Jong Un’s first official meeting with a representative of a foreign government. We regret the error.

Since succeeding his father Kim Jong Il as Supreme Leader of the Democratic People’s Republic of Korea (DPRK) in December 2011, Kim Jong Un has not traveled abroad, and has been know to snub important visitors, such as Mongolian President Tsakhiagiin Elbegdorj in fall 2013, Google chairman Eric Schmidt in early 2013, and most recently South Korea’s former first lady Lee Hee-ho in August. Kim did meet multiple times with American basketball player Dennis Rodman, but Rodman was in North Korea only as a private citizen and was not there on behalf of the United States government.

The state-run Rodong Sinmun newspaper reported that, during Kim’s meeting with the delegation on Monday, Kim made reference to celebrating the 55th anniversary of DPRK-Cuba relations and asked for Miguel Diaz-Canel Bermudez, the leader of the delegation, to pass his regards to Fidel and Raul Castro. The Rodong also said that the meeting was attended by Kim Yang Gon, director of the WPK United Front Department.

Kim also said the fact that the Cuban delegation came and visited the DPRK just a month before the 70th anniversary of the foundation of the Workers’ Party of Korea (October 10) reflects the support that Fidel and Raul Castro have for the military and people of the DPRK.

The fact that Cuba, long an ally of Pyongyang, was willing to send an official delegation to North Korea even after a rapprochement with the U.S. may be the reason Kim personally met with their delegation. Cuba has previously indicated that the rapprochement with the U.S. would not impact their other foreign relations, including those with North Korea. The North Korean regime appears to be working to maintain strong ties with Cuba despite the change in U.S.-Cuba relations.

Prior to meeting with Kim Jong Un on Monday, the delegation met with several other North Korean officials at various times and places including President of the Presidium of the Supreme People’s Assembly Kim Yong Nam, DPRK Premier Pak Pong Ju, Foreign Minister Ri Su Yong and Vice Minister of External Economic Relations Ri Kwang Gun, among others.

The Cuban state delegation visited several locations including Mansudae, where they paid tribute to statues of Kim Il Sung and Kim Jong Il, Mangyongdae, the birthplace of North Korean founding leader Kim Il Sung, and the Fatherland Liberation War Martyrs Cemetery. The delegation even held their own reception on Sunday which was attended by many of the North Korean officials whom they had met with previously.

JH Ahn contributed to this report

Note: This article originally stated that this was Kim Jong Un's first official meeting with a representative of a foreign government. We regret the error.