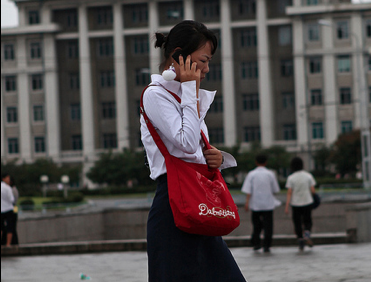 The Arirang phone costs around $300-400 and is considered a product from China, although South Korean experts have confirmed that the Taiwanese semiconductor business MediaTek produced its CPU, GPS, Bluetooth and other parts.

The phone was not made in North Korea but its parts were brought in from the outside as a “hardware package,” experts told the South Korean news source. However, there were mixed conclusions about whether or not the plastic case was made in North Korea or imported.

Although the manual directions are written in Korean – with the North Korean dialect – there is one phrase, “QA (Quality Assurance) PASS,” written in English and colored in red.

The 45 applications on the Arirang are divided into mobile games, dictionary contents and miscellaneous features. There is no access to Wi-Fi, application stores, or mobile Internet. The Google App Store, YouTube, Gmail, Chrome Browser and Google Maps are prohibited.

Most of the Arirang’s games are described as “pirated versions of early Android games” by the Dong-A Daily News, many of which are related to warfare (such as “Defensive Fight,” “Tank Fight” and “Plane Game”). One game, “Shooting Rubber Bullets (Original)” illegally replicates “Angry Birds.” There is also a game simply titled “Basketball.”

Within dictionary contents, there are collections of literature praising communism and the ruling Kim family, diverse recipes of North Korean cuisine, the Chosun dictionary, the Korean encyclopedia, Korean cooking, modern Chinese, utilities and North Korean translations for IT terminology.

It is unclear whether or not North Koreans have access to mp3 files or videos, but it is possible to transfer music and videos from a computer to the Arirang. Experts have noted that there are three songs from North Korean musicians such as the Moranbong Band already installed.

Weighing 128 grams and measuring 4.3 inches long, the Arirang is similar in size to the 2010 Samsung Wave and the Pantech Sirius. There is an Internet browser called “web reader,” but since data communication is impossible the Dong-A Daily News describes it as “useless.”

When examined by experts in a test trial, at least 80 percent of the battery power was consumed when using the phone.

The Arirang system does not have the capacity to self-regulate or renew itself yet and there is no market competition.

Upon examining the Arirang, experts in South Korea have said that the advantages that come with this smartphone are “nonexistent.”

The Arirang phone costs around $300-400 and is considered a product from China, although South Korean experts have confirmed that the Taiwanese semiconductor business MediaTek produced its CPU, GPS, Bluetooth and other parts.