The Day of the Sun, the day of the missiles

Under the watchful eyes of Kim Jong Un the might of the DPRK armed forces paraded as North Korea celebrated the “Day of the Sun”, the 105th anniversary of Kim Il Sung, the founder of the DPRK and the Kim dynasty. The parade was an opportunity for the regime to defy the United States – under the new administration – and to demonstrate the constant improvement in missile technology North Korea has achieved.

If the year 2016 was “the year of the missile”, then the parade could be dubbed “missiles on steroids”. Not one, but two Intercontinental Ballistic Missiles (ICBM 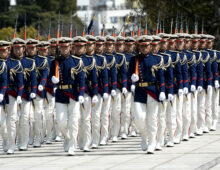