The Democratic People’s Republic of Korea (the DPRK, or “North Korea”) rarely provides direct official information on its energy sector, and the data that are often provided need to be interpreted with care.

In our over 20 years of undertaking analyses of the DPRK energy sector, we have grown accustomed to using indirect data, estimates, and comparisons with other nations using similar technologies to assemble coherent—though doubtless not entirely accurate—quantitative estimates of energy supply and demand in the DPRK. Indeed, one of the authors of this article (Hayes) conducted the DPRK’s first official greenhouse 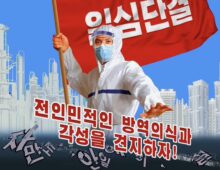 Dr. David Von Hippel is a Nautilus Institute Senior Associate based in Eugene, Oregon. His work with Nautilus has centered on energy and environmental issues in Asia, and particularly in Northeast Asia.
VIEW MORE ARTICLES BY David Von Hippel Got a news tip?Let us know!