North Korea is stepping up preparations for an upcoming military parade, NK Pro imagery analysis shows, as vehicles have appeared to gather at a key training base in Pyongyang.

The ruling party has used such parades to boost internal resolve and show off new weapons to domestic and international audiences in the past. A likely date for the upcoming military parade is April 15, the 110th birthday of North Korea’s founding leader Kim Il Sung, which state media has said will be celebrated on a “grand” scale.

In the latest satellite imagery from Planet Labs 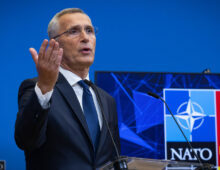