Kim also built new mansions at the complex last year, in sign that he maintains life of luxury amid shortages

One of North Korean leader Kim Jong Un’s luxurious leisure boats made a rare appearance at his Wonsan mansion complex in recent weeks, NK Pro analysis of satellite imagery reveals, indicating Kim may again be spending time on the east coast during breaks from public view.

NK Pro analysis also shows for the first time that mansions at the Wonsan compound underwent upgrades in 2021, displaying Kim’s focus on continuing to live in luxury even as the country suffered from chronic shortages. Kim appeared to build new mansions and demolish others around the country last year 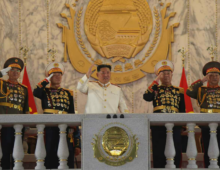