Following the North Korean leader’s momentous climb up to Mt. Paektu on a white horse earlier in the week, North Korea’s authoritative party daily Rodong Sinmun on October 17 carried an editorial expounding on the meaning of the event and laying out the key tasks facing the nation.

The party daily followed up with a political essay [jongron] on October 18 that reinforced the key points of the previous day’s editorial.

It even disclosed a Mt. Paektu visit by Kim Jong Un in October 2014 that state media may have mentioned or shown in passing 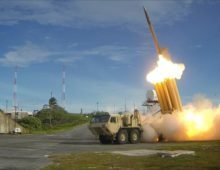