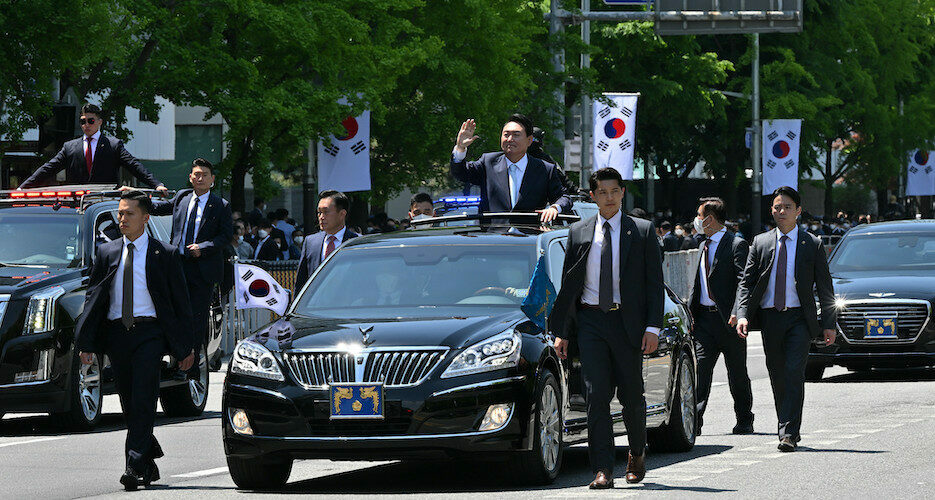 SHARE
SHARE
Yoon Suk-yeol waves to crowds out of the roof of a car on his inauguration day, May 10, 2022 | Image: Presidential Security Service, by Kang Min Seok, Republic of Korea Flickr

Yoon Suk-yeol became South Korea’s President on Tuesday, using his inaugural speech to argue that South Korean democracy faces a “crisis” due to “anti-intellectualism” and casting the country as a responsible stakeholder standing up to infringement of freedom caused by abuse of power and “armed conflicts” in other countries.

Neither the U.S., China, nor Japan were mentioned at all in the speech, delivered to some 40,000 guests gathered at the National Assembly, including U.S. Second Gentleman Douglas Emhoff and Xi Jinping’s right-hand man Wang Qishan. North Korea was mentioned four times – the only country the South Korean president mentioned aside from his own.

Tuesday’s inauguration ceremony also included the controversial opening of the former presidential compound, the Blue House, to the general public and was the most

Jeongmin Kim is a Lead Correspondent at NK News, based in Seoul. Kim covers inter-Korean and DPRK-related foreign, defense and humanitarian affairs, and has covered the 2022 ROK Presidential election on the ground. Prior to joining NK News, she worked for the CSIS Korea Chair in Washington D.C. and Reuters news agency's Seoul bureau. Follow her on Twitter @jeongminnkim
VIEW MORE ARTICLES BY Jeongmin Kim EMAIL Got a news tip?Let us know!