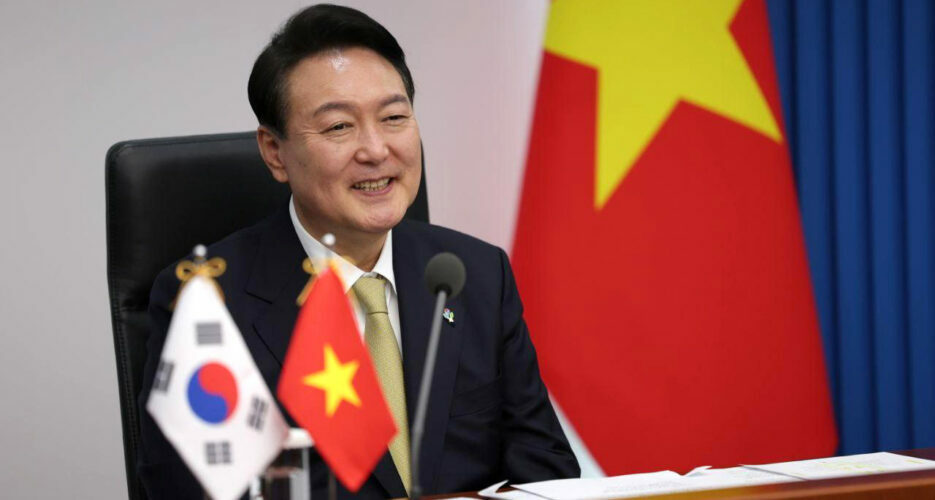 The two countries’ joint statement formally announced that the Yoon administration will move ahead with formulating its own “Indo-Pacific strategy framework,” which would complement the U.S. blueprint for the region.

While details are still in short supply, it’s likely that South Korea’s new strategy will repackage elements of Moon Jae-in’s NSP. But the Yoon administration’s approach appears aimed at reenvisioning cooperation with Southeast Asia and India within the context of closer U.S.-South Korea ties.

While this provides Seoul with an opportunity to reconceive its role in the region, it will be important for South Korea to make sure its ASEAN partners are on board if the two sides are going to continue strengthening economic and diplomatic ties.

U.S. President Joe Biden and Yoon at a press conference after their summit talks in Seoul on May 21, 2022 | Image: South Korean Presidential Office

The overall objectives of South Korea’s Indo-Pacific strategy are not necessarily new compared with the Moon administration’s NSP, which had an overarching focus on economic cooperation. In fact, the initial push for launching the NSP in Nov. 2017 was Beijing’s economic retaliation against South Korea for deploying a U.S.-made THAAD missile interceptor system, as Seoul sought to reduce its economic dependence on China.

Sea Young (Sarah) Kim is a visiting scholar for the United States-South Korea Cooperation in Southeast Asia Program at the East-West Center in Washington, supported by the Korea Foundation. Her writing focuses on U.S.-South Korea relations, South Korea-Southeast Asia relations, and East Asian regionalism. You can follow her on Twitter @sea_youngkim.
VIEW MORE ARTICLES BY Sea Young (Sarah) Kim Got a news tip?Let us know!